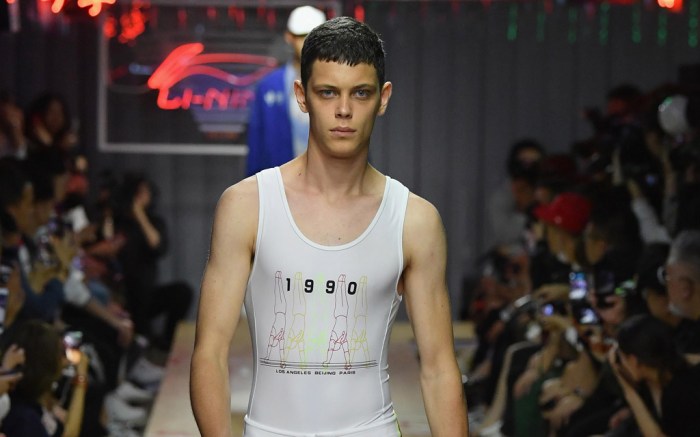 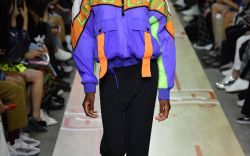 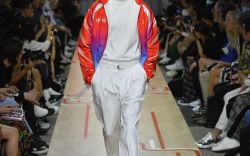 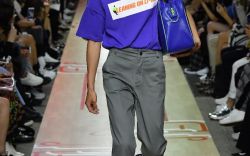 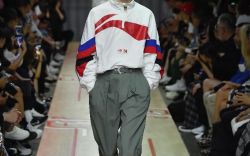 Chinese sports giant Li-Ning made its Paris Fashion Week Men’s debut on Thursday to showcase a chunky-sneaker-laden spring ’19 collection. After launching internationally in January at New York Fashion Week, the 28-year-old brand has turned to the French fashion capital to continue its global push.

Founded by its namesake in 1990, the brand reached back in its vault to create a collection inspired by the highly decorated Olympic gymnastic athlete and his esteemed achievements. In 1984, he won three gold medals, two silver and one bronze at the Summer Olympic Games.

“His personal story — a focal point of the brand’s heritage — unfolds across apparel and footwear that references the graphics and aesthetic language of Mr. Li’s heyday. Yet the result is progressive and contemporary, with oversize proportions, advanced fabrics, street-inspired silhouettes and clashing colorways,” the brand explained in a press release.

Similar footwear silhouettes that were on display for fall ’18 were revisited this season. The dad shoe was the foundation of the assortment, as the label’s 001 Retro (launched in 1991) was revamped with neon-bright colorways and thick outsoles. Li-Ning has also reconstructed a 2004 design, warping it into the Aurora 2018, which features a built-in sock liner and plays up texture.

There’s also several new colorways of the Butterfly 2018, a sneaker-boot hybrid offered in low-top and high-top versions. Meanwhile, the Furious Rider — the newcomer to the group — incorporates three-dimensional components and a gradient effect.

Four designers are behind Li-Ning footwear, with Li Chao creating most of the spring ’19 styles.

“Our brand carries the genes of an athlete,” founder Li Ning stated in the press release. “This collection is a modern point of view on our timeless story.”