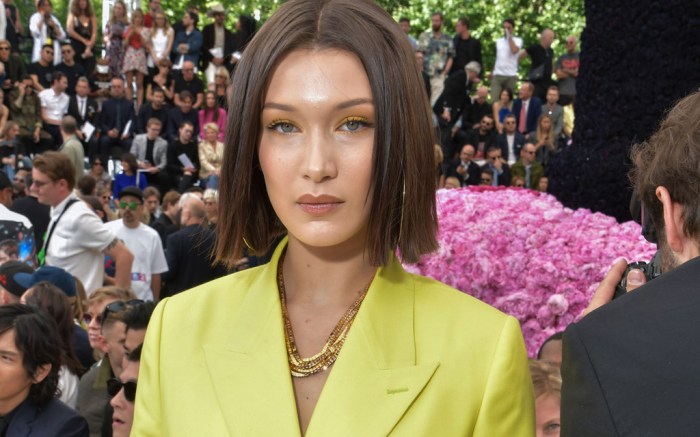 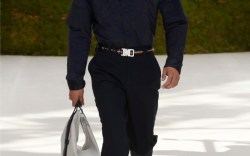 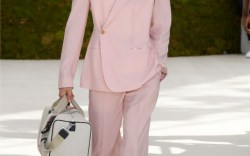 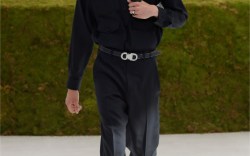 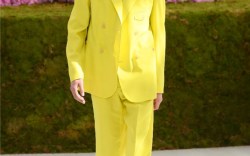 Having pioneered streetwear for the luxury realm, not least with his Supreme collaboration at Louis Vuitton, Kim Jones showed his softer side today in Paris.

For his Dior Homme debut he drew inspiration from the French maison’s womenswear archives, borrowing from female silhouettes and applying couture techniques like lacework and embroidery.

Bella Hadid proved the perfect poster girl for the designer’s non-binary new look. She stopped short of walking in the show but sat up front modeling a bright yellow pantsuit from the collection teamed with a pair of Jones’ hero spring ‘19 shoes. The baseball-style high-tops featured a Toile de Jouy print of the Dior logo encased beneath a sheer Perspex overlay like a pressed flower.

Monsieur Dior was a keen gardener and lover of nature, so Jones tapped U.S. artist, KAWS to create a giant floral version of his BFF character for the runway centrepiece.

It represented the house founder himself and his dog. Albeit in cartoon form. The artist also gave the ‘toon treatment to the Dior bee, which Jones had embroidered onto tulle by feather specialist Maison Lemarie – complete with quills for wings.

But while there was even a mono-block look in Dior pink, sneakers included, Jones’ flights of fancy were grounded by the chunky footwear.

Desert boots with sneaker style soles featured spoilers at the rear in bumble bee yellow and the collection felt commercial and wearable.

Click through the gallery to see more looks from Dior Homme’s spring ’19 collection.