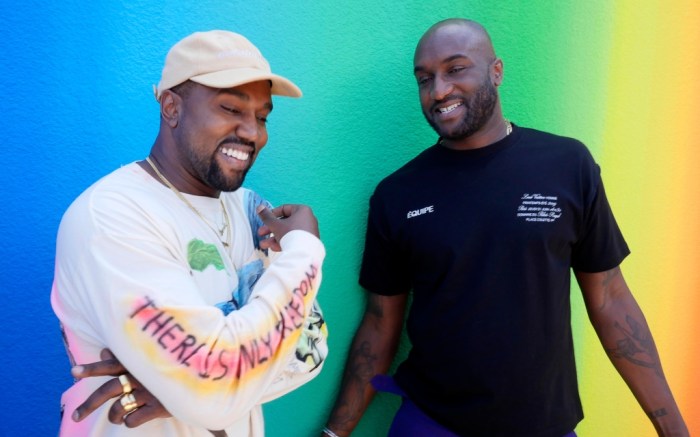 Virgil Abloh debuted his menswear collection for Louis Vuitton spring ’19 in Paris today. Below, we look at the five best moments.

1. Its “Color Theory” Had Multiple Meanings

The collection’s theme was inspired by the color explosion that occurs when white light hits a prism, with all-white looks opening the show and color — in bright reds, pops of prismatic neons and tie-dye prints — following along on a color-gradient runway. But Abloh’s “Color Theory” went beyond just the clothing, shoes and accessories: The show included an extremely diverse cast of models, an important message for Louis Vuitton’s first black artistic director.

2. The Collection Also Debuted on the Front Row

In addition to the looks shown on the runway, Abloh flipped the idea of front row VIP dressing on its head, having attendees like Travis Scott, Rihanna and Kim Kardashian don a few of the men’s pieces themselves. Kardashian wore a bright blue cargo jacket, worn belted as a dress, RiRi arrived in a white oversized top and matching trousers (which she accessorized with white pumps and Vuitton’s new transparent Keepall duffel), and Scott wore a white jacket and pants with a purple T-shirt and the collection’s instantly-recognizable ceramic chain link.

Abloh is the reigning King of Sneakers, so it was no surprise to see a variety of styles and colors in the collection, all of which leaned toward the retro. There were suede runners and skater-style kicks in both low and high-top versions, but there were also a few dress shoes, complete with neon laces, and a pair of lace-up and strapped nubuck boots with an elongated toe box. And a sneak peek at a pair of black-and-gray Jordan-esque high tops with a prominent Vuitton logo on the bottom of the soles prove that the designer is ready to do for Vuitton what he has done for Nike.

4. His Musician Friends Walked the Show

The designer’s resume as a former DJ (and creative director to Kanye West) is well known, and in addition to the high-profile front row (which included West, Scott, A$AP Rocky, Miguel and Moses Sumney, Abloh recruited a few of his most talented friends to actually walk in the show. Kid Cudi, Playboi Carti, Dev Hynes, The Internet’s Steve Lacy, London rapper Octavian all walked the show.

5. The Designer Teased Sneak Peeks — And Did His Homework

In the days leading up to the show, Abloh teased a few details here and there, from a pair of red-and-gold logo sunglasses to ceramic link necklaces and gray-and-black logo high-tops. Hours before the show — which was broadcast on Instagram’s new IGTV — the designer showed images of the color gradient front row, which held plastic tubes filled with colorful T-shirts. And his show notes included a world diagram map showing the birthplace of each model and the model’s parents. “Essential to my show concept is a global view on diversity linked to the travel DNA of the brand,” wrote Abloh in his Instagram post.

essential to my show concept is a global view on diversity linked to the travel dna of the brand. the studio creates these show notes. we created this world diagram on the seats that shows models birthplace, and the birthplace of their parents. issue #1 also located on each seat. my dictionary of terms included as well.

like some kids today i started the surreal mission without “fashion school” but a blank t-shirt, a screen printed idea for it and a dream. as a nod to that on every seat is a graphic t-shirt I made the early days @louisvuitton once i learned how to use the photocopier in the office.