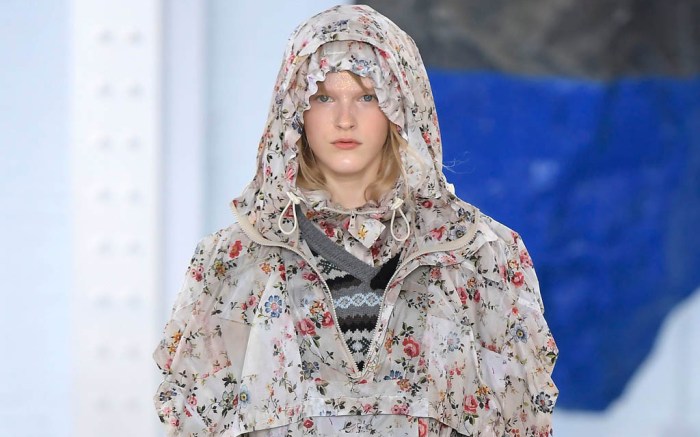 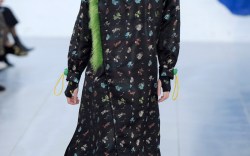 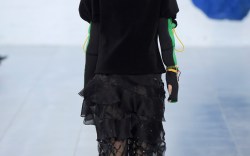 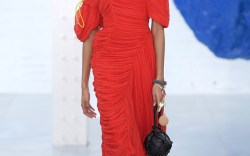 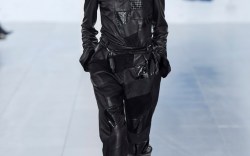 For fall ’18, Preen’s Justin Thornton and Thea Bregazzi, who showed their latest collection today at London Fashion Week, celebrated strong women. But their protagonists were far from the usual suspects.

The husband and wife duo were inspired by Korea’s female Haenyeo divers, some of whom are in their 80s. “They dive for octopus and squid; they are the main bread-winners,” said Bregazzi. “The men stay at home and look after the kids, and it works perfectly.”

Thornton and Bregazzi first encountered the Haenyeo via a photographic exhibition at London’s Maritime Museum. “We loved they way they layer pretty tops over their functional rubber wet suits,” said Bregazzi, showing FN a mood board of images that inspired the show’s opening looks.

Footwear, too, took its cue from the ocean. Sandals and rubber diving boots came embellished with feathers and fur, recalling seaweed or sea anemones undulating in slow motion beneath the waves. Hosiery was a delicate collage of fishnet and lace, like actual fishing nets that had been mended a hundred times. Some came sprinkled with sequins and pearls.

“The green ones were particularly seaweedy,” noted Thornton of the shoes. “We wanted something that moved a bit like seaweed, like when you see it half in the water and half on the rocks.”

“It was just about the organic-ness of it really,” he added. “These women are eco-feminists; they’re this matriarchal society and we just wanted to celebrate it.

“I don’t think men are doing a very good job of looking after the world, so let’s hope women are going to do a better job.”

The Malone Souliers Presentation Was Full of Naked Ladies