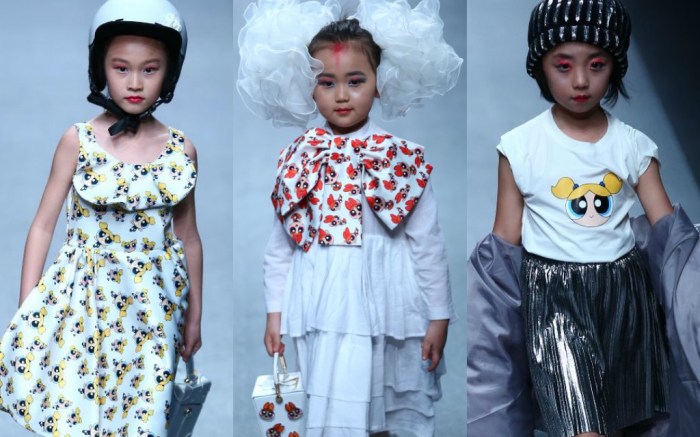 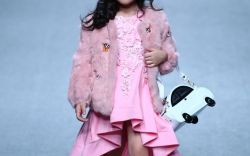 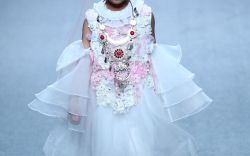 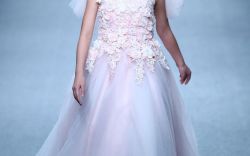 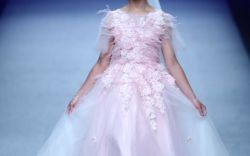 Who better to walk the runway in clothing peppered with characters from the Cartoon Network’s “Powerpuff Girls” series than adorable kids? This was the case today at Feng Sansan’s fall ’18 show at China Fashion Week in Beijing.

Pint-sized models hit the catwalk in playful looks inspired by the long-running animated show, which follows three superpowered sisters known as Blossom, Bubbles and Buttercup, who regularly save their town from evil.

Here, a youngster struts in a bubblegum-pink floral applique dress teamed with a furry pink jacket featuring the face of the trio’s red-haired leader, Blossom. An embellished white beanie, coordinating kicks and a car-shaped handbag completed the child’s look.

Another miniature model showed off the face of blond-haired Bubbles on a simple white tee. Paired with white sneakers, a flowy metallic skirt and a matching coat, a black beanie with silver metallic accents pulled things together.

Meanwhile, one boy not only modeled a white hoodie boasting black-haired Buttercup’s face but also toted a toy doll of the character known for being the toughest fighter.

An oversized cardigan in Buttercup’s signature color, green, as well as crisp white trousers and slip-on loafer-inspired sneakers in the same color wrapped up the ensemble.
China Fashion Week kicked off on Sunday and concludes on April 1.
Check out the gallery for more from Feng Sansan’s fall ’18 show.

NRF Predicts Easter Spending to Be Second Highest Year on Record: Will It Move the Needle for Fashion?

The 5 Best Photos from Air Max Day on Social Media