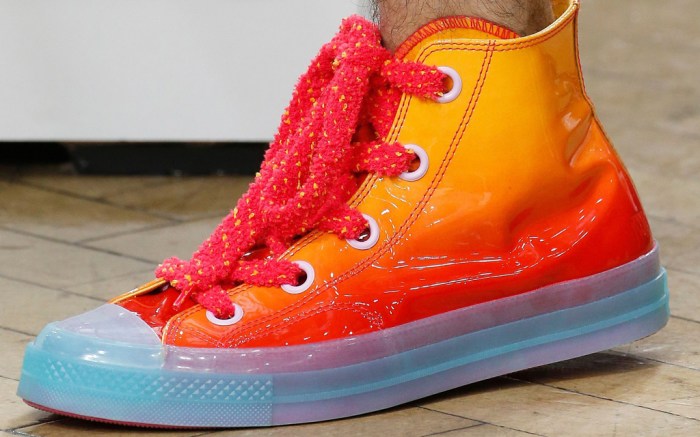 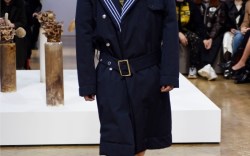 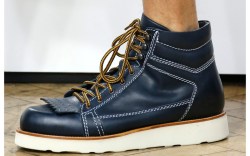 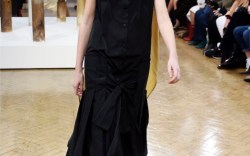 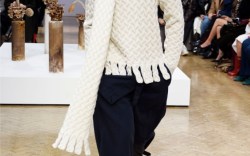 The collection of fall kicks, sported by girls and boys alike, came with a shiny plasticized coating and mismatched, contrast-color laces done in toweling fabric. Best in show? The day-glow orange versions of course.

(And from FN’s spot backstage, we discovered that the styling team actually ironed the shoe-laces of the footwear to ensure the sneakers looked pristine on the runway.)

Other shoe styles in the collection included laceup sneaker-boots and Western-tinged ankle boots for men and women.

After the show, designer J.W. Anderson spoke about his decision to merge men’s and womenswear this season. “We’ve been going for 10 years, so now we have to go forward in an optimistic way and embrace change to make it exciting,” he said. “It’s amazing as it means you can bring both wardrobes together and show them together, so instead of speaking to two different audiences we can just speak to the one.”

He added, “A lot of women are buying men’s and vice versa, so it makes sense to merge it all into one J.W. Anderson look.”

The designer also used the show as a vehicle through which to launch an exciting competition for up-and-coming photographers, where the winner gets to shoot his label’s next campaign.

But everyone walked away happy from this youthful, optimistic production — not least the models. Each one was gifted a pair of spring’s J.W. Anderson logo’d Converse Chuck Taylor boots. Model Blesnya Minher even treated FN to a little unboxing ceremony. Visit our Instagram Story highlights to see it in action.

Click through the gallery to see the full J.W. Anderson fall ’18collection.