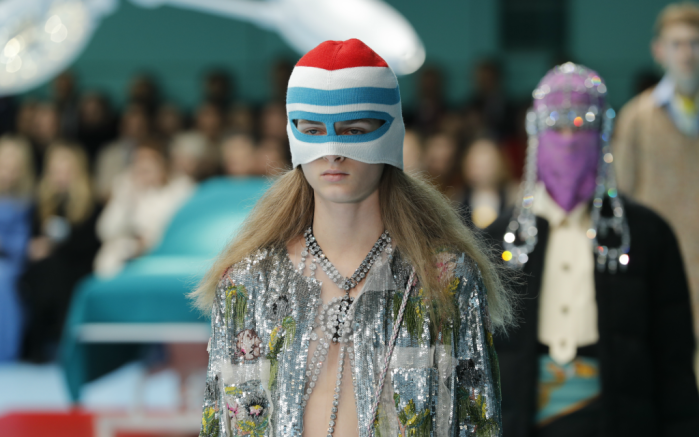 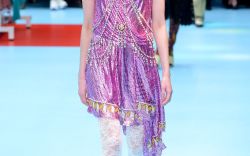 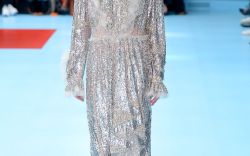 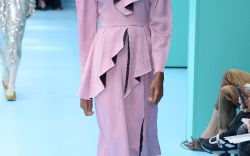 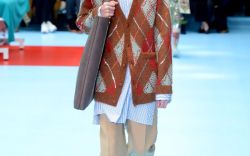 It was a sunny day in Milan, but inside Gucci’s fall 2018, which the Italian fashion house held on Wednesday to kick off Milan Fashion Week, things were downright creepy. In a windowless space with slick floors and hospital lighting — all resembling a surgical ward — the brand’s creative director, Alessandro Michele, showed his signature magpie mix of the elaborate with the casual, but this time with an ominous twist.

Michele paired exquisite bejeweled gowns and metallic coats with knit balaclavas (inspired by vintage ski knits), which read as horror-movie ski masks, and he even sent some of his models down the runway carrying terrifyingly accurate replicas of their own heads.

And, in what is sure to be one of the most viral moments of the season, a single model — in a “Game of Thrones”-appropriate crystal-embellished black velvet ensemble — carried a baby dragon in her hands. Inspiration did not come from the hit HBO series, it turns out, but instead by the “Legend of the Baby Dragon in a Jar,” a story of a British author who staged finding a such a creature in his garage.

The shoes were less creepy in and of themselves but still lent to the horror movie vibe: heeled loafers clomped loudly on the cold floor, and logo hiking boots, which Michele first introduced for the pre-fall collection and are sure to be one of the biggest commercial pushes for fall, felt appropriate for horror-movie running scenes.

There were also plenty of quirky socks and hosiery, adding to what is already one of the biggest trends of the season, thanks in large part to the sparkly tights and socks that Michele showed in seasons past.

Check out more from the Gucci fall ’18 show here.