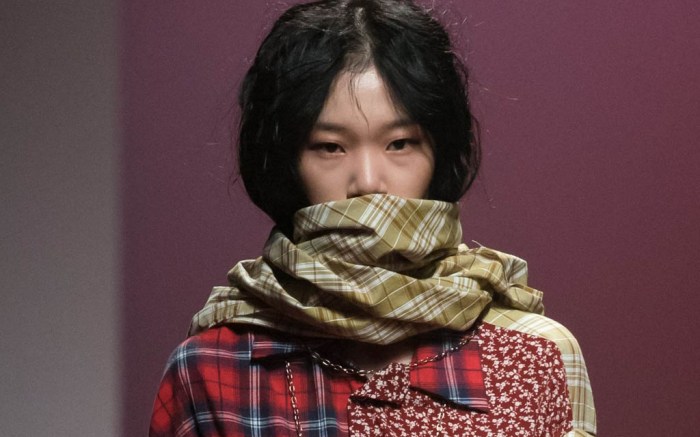 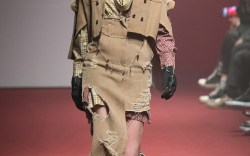 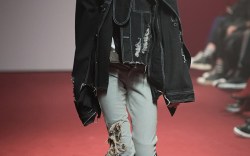 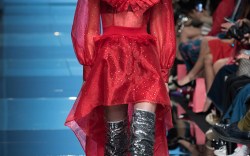 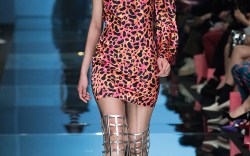 Whereas experimentation with fabrics and towering silhouettes made for standout shoes on the catwalks of Tokyo, it was an emphasis on print and fur details that accounted for Seoul Fashion Week’s craziest shoes during those same dates (March 19-24).

Similar to New York Fashion Week, in which snowboots stole the show, this silhouette was also a key style in the South Korean capital, especially for LIE’s fall ’18 collection by designer Chung Chung Lee. See the brand’s blue sherpa boots and matching zip-up jacket below — one of the week’s most eye-catching looks — alongside bandana-printed boots at R. Shemiste and allover leopard styles at Charm’s.

The built-up snowboot was a huge message at LIE, featuring an array of version, including neutral-colored options in gray and black. Its sky blue pair, covered in fluffy sherpa, was paired with a perfectly coordinated jacket, making for a winter ice-queen aesthetic.

R.Shemiste decided that for its fall ’18 offering, bandana scarves were best suited for the feet. The designer presented several iterations of the knee-high boot, including the classic red bandana print.

At Charm’s, it was all about making a statement with leopard spot. The allover print was utilized in boots, ankle booties and even men’s platforms; its bright yellow base a hard shade to miss.

See more of the craziest shoe styles on the runway at Seoul Fashion Week.

7 Bright, Bold Shoe Styles to Get You in the Springtime Spirit