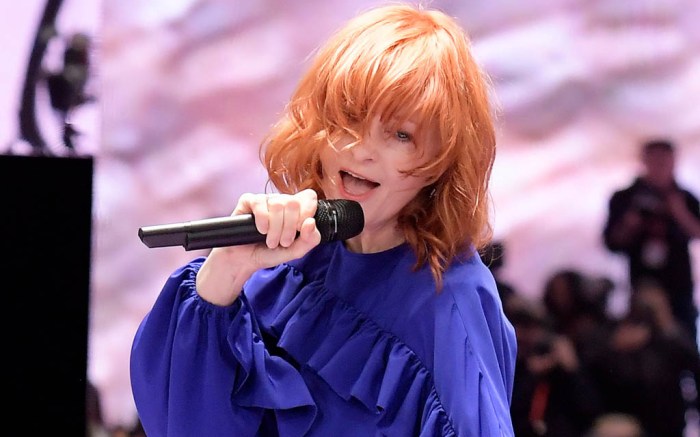 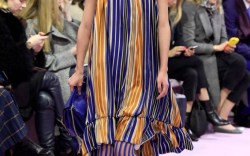 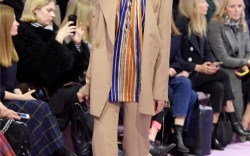 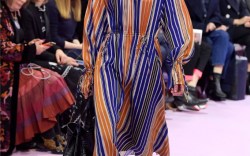 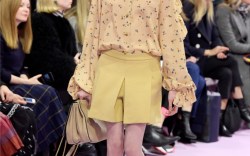 The Mulberry show, which took place today, on the first day of London Fashion Week, celebrated the best of British style. English musician Alison Goldfrapp performed wearing a purple jumpsuit and a pair of sky-high platform heels, while the collection itself took its cue from English eccentricity.

Models wore ruffled ballet-inspired pumps with round fluted heels recalling a china collection that one might expect to find in a grand British country house. Some even came festooned with multicolored gemstones.

“Inspiration was a mix of the British countryside and a massive collection of porcelain belonging to one of my friends,” Mulberry creative director Johnny Coca told FN backstage after today’s show.

“I wanted the collection to look classic but modern and eccentric at the same time,” he said.

When it came to the heels, he said, “I created in the same volumes as porcelain vases,” explaining that although they looked like extremely fragile china, they were actually made of resin to make them more durable.

“I love breaking conventions and playing with objects,” he said.

The see-now-buy-now show also marked a break from convention for Mulberry. The brand skipped its runway spot last season, opting for a small presentation in Paris so it could realign its schedule in favor of this new consumer-facing model.

The collection’s ostentatious millinery recalled the sort of hats that might be worn at the Ascot horse racing festival or a posh British society wedding. Did Coca have the upcoming wedding of the year in his sights? The nuptials of Meghan Markle and Prince Harry?

“Maybe,” he demurred. So any looks fit for a soon-to-be princess? “One of the pantsuits from the first or second looks.” The first, a subdued double-breasted affair in cream, is probably the more Royal Family-friendly. The second, bright green, not so much. But here’s hoping.

Click through the gallery to see the full collection from London Fashion Week.