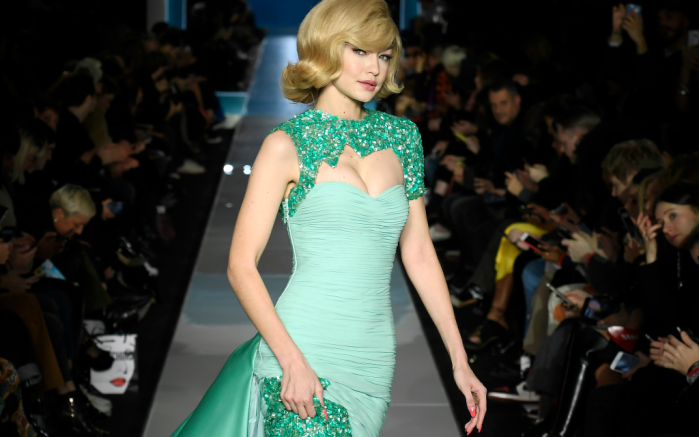 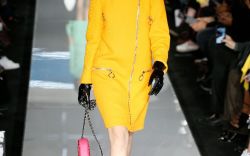 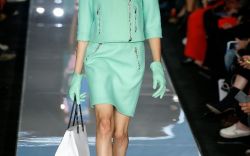 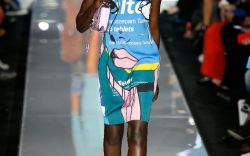 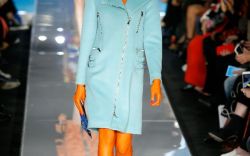 For his namesake fall 2018 show at New York Fashion Week, the designer brought out faux fur and metallic moon boots in a special collaboration with the brand. And for his Moschino fall 2018 showing on Wednesday night at Milan Fashion Week, the designer went full-on outer space with colorful ’60s-retro looks, an intergalactic runway done in alien spaceship blue lighting, and even models in full body paint meant to evoke the era’s notion of the cartoon-like Martian.

Scott paired the body paint with colorful Mary Janes and ladylike pumps that were equally as retro as the clothing (and the hair, which was done bouffant style on the likes of models Kaia Gerber, Joan Smalls, Bella Hadid and Gigi Hadid).

Gigi closed the show in a long seafoam green beaded gown with an open neckline, complete with the teased hairstyle and ’60s makeup. The look was equal parts Marilyn Monroe and Jackie Kennedy, with conservative clothing and footwear that perfectly channeled the former first lady’s wardrobe and the signature beauty looks of the immortal actress.

The prim fashion looks were a far cry from Scott’s namesake fall 2018 collection (which included PVC skirts, crop tops and the aforementioned moon boots, which went well over the knee). But the saturated contrasting colors — and the outer space alien themes —linked the two collections perfectly.