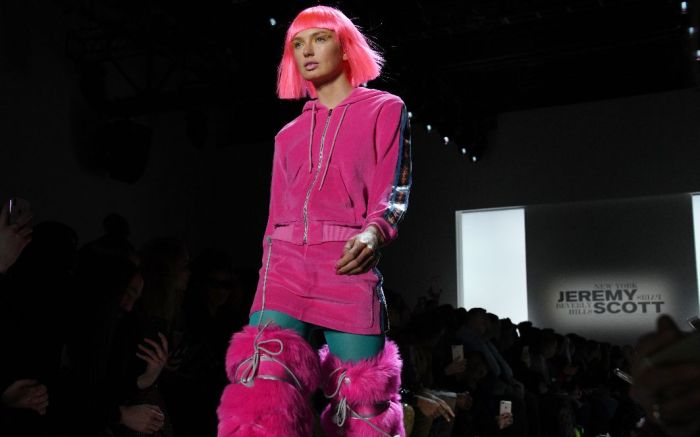 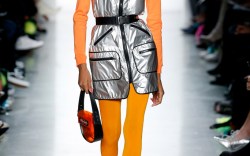 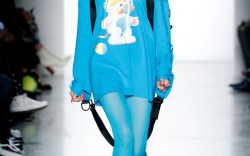 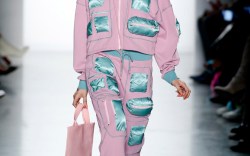 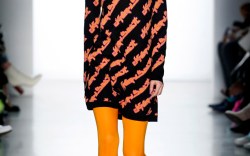 Jeremy Scott’s designs can be described as many things, though “practical” is not usually the word that comes to mind. But on a 20-degree evening during New York Fashion Week, during one of New York’s most brutal winters, the designer’s debut of thigh-high, faux-fur Moon Boots during his fall 2018 runway show was the most sensible winter footwear choice.

The boots — a collaboration between Scott and the 47-year-old Italian footwear brand — were done in the classic Moon Boot shape from the early 1970s but with a twist:  For the handful of men’s versions that walked the runway (paired with sunglasses, harnesses, printed leggings and pleated backwards hats), the boots were metallic gold and done in the traditional length.

And women’s styles were even more far-out: Silver thigh-highs were accented with neon green laces, shiny gold thigh-highs were styled with a matching cropped gold jacket, bright orange and printed versions had a warm, puffer quality and a pair of hot-pink, faux-fur thigh-high boots proved making a statement and staying warm can be done simultaneously.

The collection also included a rainbow of candy-colored lace-up platform booties and coordinating tights, in purple, turquoise, orange, green and pastel pink, the last of which Gigi Hadid wore, both to open and close the show (those wondering why Hadid didn’t walk the Tom Ford show, which boyfriend Zayn Malik and brother Anwar attended now know why). With all of the color on the runway, it was difficult to notice the show’s biggest name on the front row; Cardi B, who kept a low profile in an all-black ensemble with matching sunglasses and white leather boots.