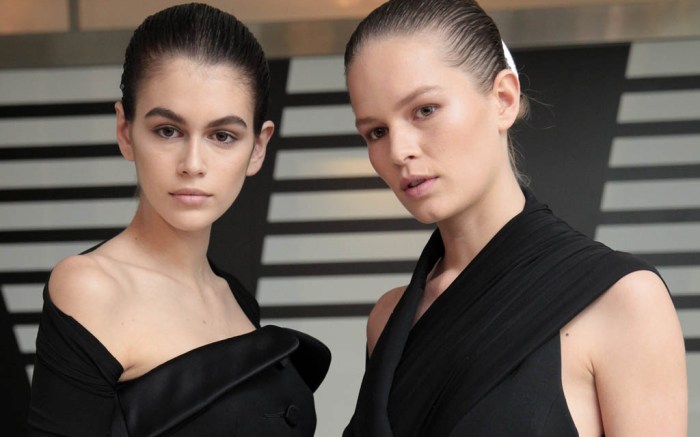 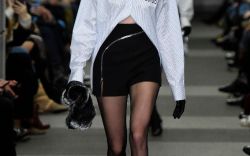 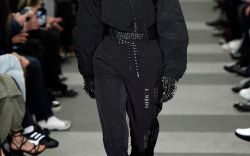 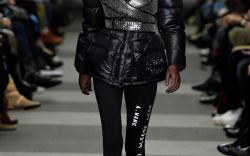 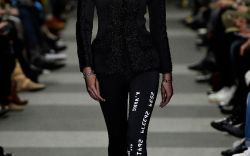 The soundtrack to Alexander Wang’s fall 2018 show was unmistakable tonight. That satisfying (but slightly perverse) sound of heels on a marble floor, click-clacking in a rhythm that quickly sped up to a frantic run played for a good 30 seconds before Wang’s models even emerged.

When they did, they were clad in sheer black hosiery (with “Alexander Wang” running down the side) and black leather pumps, each one with a severe square metal stiletto heel. Paired with zip-accented jackets, leather and mini dresses, along with a rushed, purposeful gait, the show was a clear nod ’80s power dressing, with modern touches thrown in along the way.

It was apparent even before the show started that Wang would tackle office attire (and footwear); with the location of Condé Nast’s former Times Square headquarters in midtown Manhattan, on the 21st floor (not Vogue’s former floor, the 25th, but close), how could he not? The offices famously served as inspiration for Lauren Weisberger’s novel-turned-film “The Devil Wears Prada,” in which the author describes a certain group of fashion editors as “the clackers,” for the intrusive sound their stilettos made in the lobby.

The show was for those clackers — or at least the 2018 version of fashion editors, who are now more likely to run around in sneakers than stomp in stilettos while attending shows (a welcome change).

Unlike Wang’s notoriously celeb-packed mega-productions, only a handful of big names were seated in the smaller, front-row only show (Cardi B was there, seated next to Anna Wintour, wearing a canvas trench and black leather over-the-knee boots). “The lighting here is really rough!” commented one editor to another, looking up at the fluorescent bulbs.

The clothing — zippered leather, minidresses, hoodies, anoraks and sweat suits — was iconic Alexander Wang. So, too, was the hosiery, with the designer’s name running down the sides in crystals and velvet, some done as full body stockings, others in black lace or as leggings that mimicked credit card typeface.

But in the midst of a strong partnership with Adidas, the stiletto pumps were something of a surprise.

Wang is all about looking cool and effortless, which made the high heels — and the many models who visibly struggled to walk in them on the gray office carpet — look more like a social commentary on the power politics of women in the workplace than a literal footwear suggestion. Maybe it was.

Still, for many, there is nothing more powerful than a high heel — and the sound it makes on the floor. For those power walkers, there’s a sharp new heel on the way.