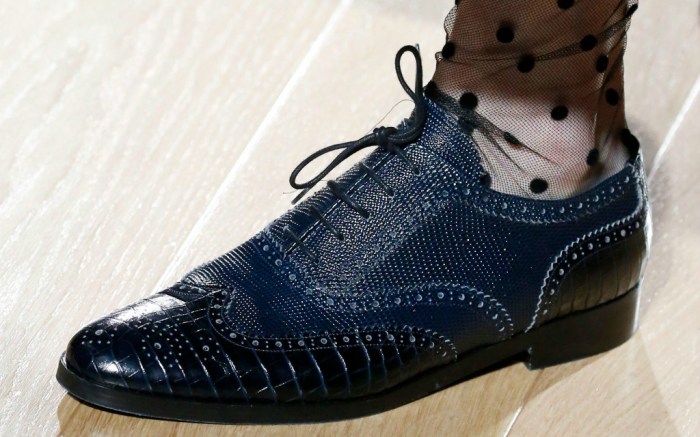 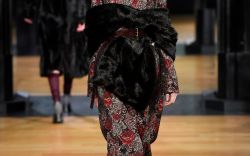 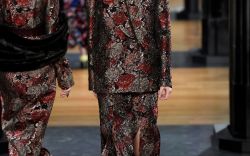 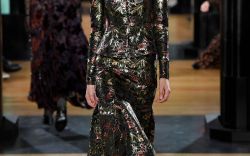 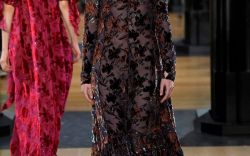 With his signature jacquard and velvet fabrications, designer Erdem Moralioglu is the king of ornate eveningwear. But how does he keep it contemporary? With his footwear, of course.

At London’s National Portrait Gallery today, he introduced brogues and styled them with ballgowns. This season’s muse was Adele Astaire, Fred Astaire’s showgirl sister who, according to the designer, was infinitely more talented.

The American dancer married the British son of the Duke of Devonshire. “She was a really strong woman, completely independent, but she married into a very formal aristocratic family when it wasn’t the done thing to be a career woman,” he said. “She disappeared into a castle in Ireland, but not before she delayed the marriage so she could perform in one final show.”

(And no, there were no deliberate parallels between Astaire and the duke with Meghan Markle and Prince Harry — we asked.)

“I imagined her roaming the moors wearing brogues with her glitzy, spangled Vaudeville dresses; and it was that kind of contrast that I loved,” Moralioglu told FN.

He has never been one for a crippling stiletto, and since he launched shoes some two years ago, it’s been all about wearability, with key styles being flatforms and block and kitten heels.

These silhouettes were seen as gorgeous, bejeweled mules done in both sumptuous velvet and a Prince of Wales check.

Footwear came teamed with spotted stockings, another reference to Adele, who was a big fan of the polka — both the dance and the dot.

Click through to view the entire Erdem fall ’18 collection.