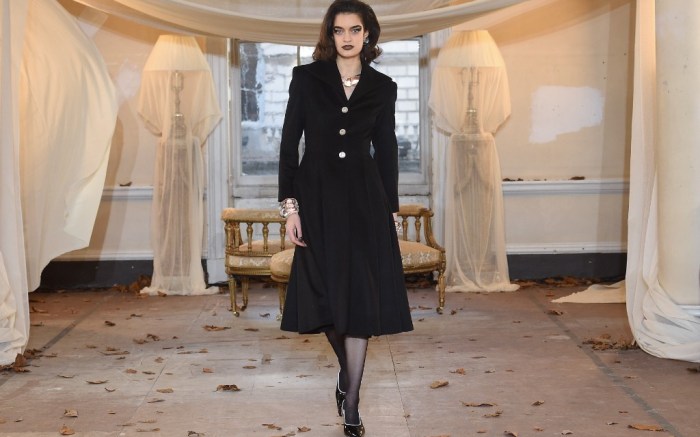 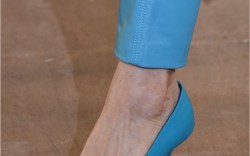 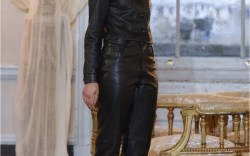 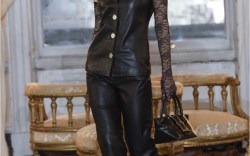 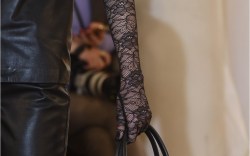 There was something afoot at the Dorateymur London Fashion Week presentation today and it wasn’t just the shoes.

Footwear designer Dora Teymur, known for his quirky silhouettes, has launched a capsule ready-to-wear collection, along with a handbag line, and he definitely doesn’t do things in half measures.

“I like pushing limits,” he told FN backstage after his salon style show, which took place in London’s Somerset House venue. “I’m just trying things. I’m trying to know myself more and what I’m capable of.”

The collection, titled “Why I Love Her,” began with an examination of Louise Dahl Wolfe’s 1942 post-war photograph “Walls Have Ears,” which he combined with the contemporary everyday characters of Tina Barney’s book “Players.”

“It’s about an elegant spy character who’s quite wacky,” he said. “But she’s also a rich woman who sips a martini at 8 a.m. before she leaves the house.”

While Teymur’s spy would be unlikely to remain under the radar if she wore his hero look — a bright red leather flying suit — she would certainly cut a dash, especially if teamed with a pair of matching pumps with a winged metal detail.

Elsewhere, there was an unusual new pump shape featuring a lightning bolt detail, this time cut into the leather at the side. “They have a nice ’80s silhouette,” Teymur said, “I’m calling them the Jazz Pumps.”

The style marks an inspired take on the current vogue for a deep-V vamp.

“It’s the full look,” the designer said of the collection. “I’m going up and it’s OK to go bigger, isn’t it?”

Click through the gallery to see the full Dorateymur fall collection.

Snow Boots Took the Crown for the Craziest Shoes at NYFW