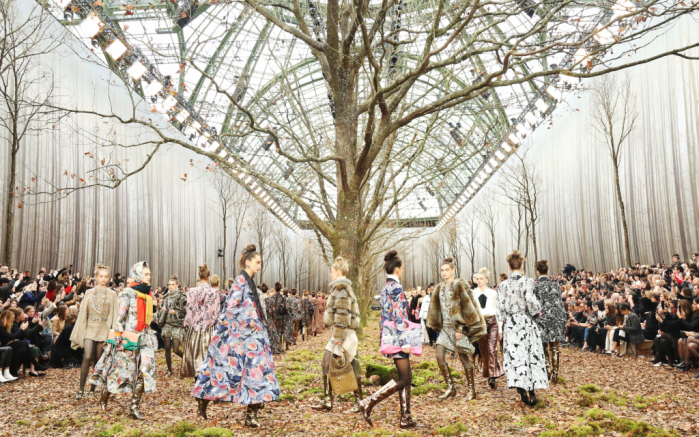 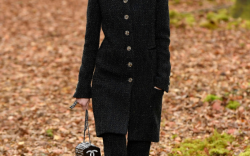 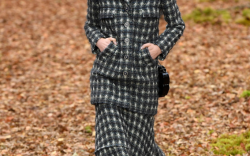 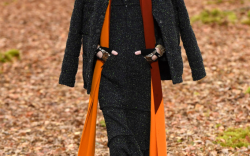 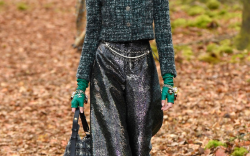 There’s always an elaborate set design at a Chanel show. From rocket ships, casinos and supermarkets to last season’s water park of sorts (in which models splashed about in clear rainboots and gear), Karl Lagerfeld and company always create something that is either pure fantasy or an exact replica of real life.

Today’s show was the latter, as the Grand Palais was transformed into an autumnal wonderland, with bare trees and tons (literally) of dead leaves, which covered the entire floor — and got all over guests’ pristine Chanel shoes.

The entire scene resembled a walk in the park — perhaps Central Park’s dense wooded pathways or the wide manicured lanes of the Tuileries in Paris, or any locale, for that matter, where the seasons change and leaves fall to the ground.

There were shoes to match. Models walked the leafy runway in metallic gold boots that from afar appeared to be a crackled leather but on closer inspection had a more nuanced, warped pattern that could be interpreted as either as camouflage or an abstract art print.

The boots, which had a subtle Western shape, were paired with statement outerwear that featured delicate leaf motifs, further contributing to the idea of a very chic haute camo.

The boots, low-heeled and done in over-the-knee and below-the-knee styles, are sure to be the pièce de résistance for the season, but there were also plenty of patent leather brogues, which were paired with long, dark coats and lacy black eveningwear — proving that Lagerfeld is dedicated to giving women shoes that are easy to walk in — in the park and elsewhere.