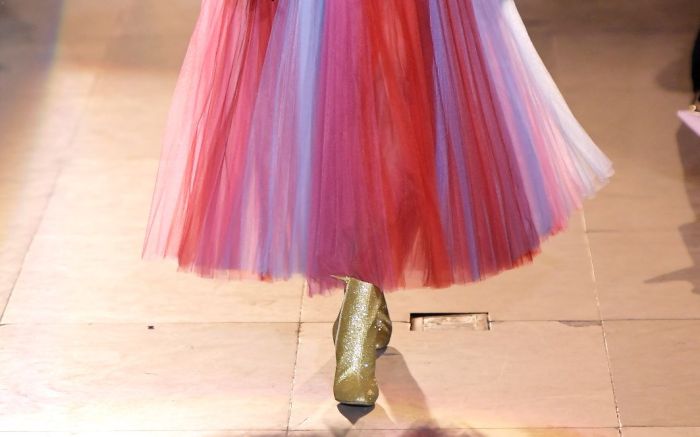 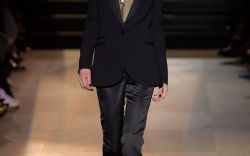 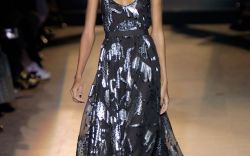 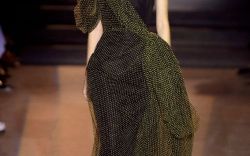 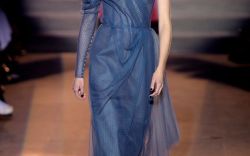 Season after season, Carolina Herrera’s collection can be counted on for adding elegant, stately gowns and chic daytime wear to New York Fashion Week — and with them, shoes from Manolo Blahnik, a longtime collaborator. The shoe designer partnered with Herrera yet again for her fall ’18 show Monday night, her final showing after it was announced last week that she was stepping down from her company, with Wes Gordon appointed as the new creative director.

The clothing was as ladylike as ever, with long, ankle-length daytime silk dresses and evening gowns of chiffon and taffeta in rich jewel tones like ruby and turquoise. And for the finale, 20 models walked the runway in homage to Herrera’s own signature look, wearing crisp white cotton shirts and colorful taffeta floor-length skirts with contrasting colored belts.

The shoes perhaps hinted at the things to come. Blahnik created a series of colorful high-heeled ankle boots done entirely in glitter (magenta, gold, gunmetal, silver and black) and another grouping in two-toned velvet (in purple, blue and red). There were also a handful of velvet loafers with low contrasting heels.

The shoes were classic silhouettes done in edgier materials, which could also be the approach that Gordon will take with the 37-year-old fashion house, updating it for a younger customer but maintaining Herrera’s grace and elegance.

Click through to see the entire Carolina Herrera fall ’18 collection.