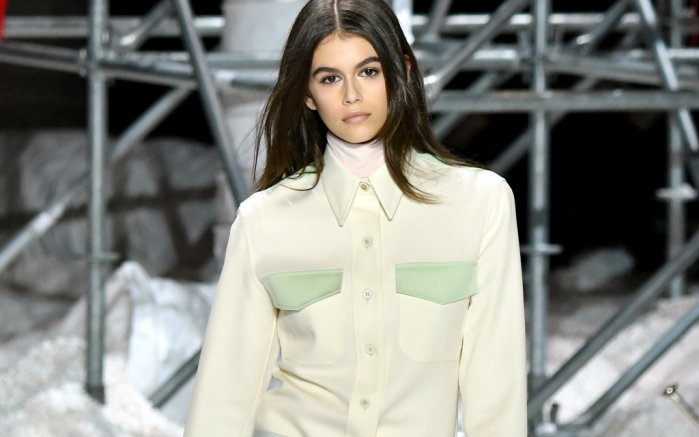 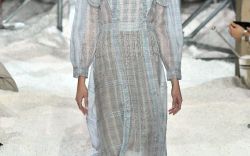 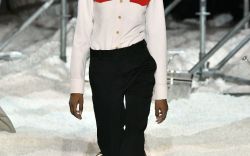 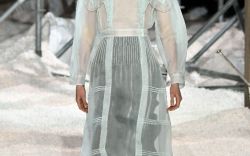 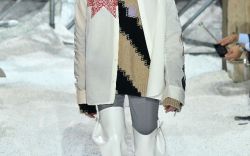 There are plenty of theatrics during New York Fashion Week (fake snow and alien spaceships, live musical performances, unexpected locations), but none have been as joyful — or tactile — as the act of walking through popcorn.

That was exactly what happened at Calvin Klein’s fall ’18 runway show Tuesday night at the New York Stock Exchange, which was transformed into a rural American farm meets pop art warehouse, complete with a barn structure, Andy Warhol photos and Sterling Ruby sculptures hanging from the ceiling. The floor was layered with popcorn about a foot deep, and everyone from Nicole Kidman, Lupita Nyong’o and Cindy Crawford to ASAP Rocky, Millie Bobby Brown and Margot Robbie had to wade through the movie-time snack to get to their seats.

The runway was littered with popcorn, too, and creative director Raf Simons’ models plodded through it, many wearing rubberized over-the-knee boots in black and white. The boots were not of the usual sexy over-the-knee variety but instead had a thick rounded toe, like a snowboot or workboot, and were more reminiscent of hazmat boots or even Cabela’s fishing hip waders than footwear for a night on the town.

The boots were shown on both male and female models and were paired with fireman-style jumpsuits and wool knit balaclavas over the head. (The least dystopian look was modeled by Kaia Gerber, who wore ice-blue tailored trousers with pair of the boots in white, along with one of Simons’ now-signature shirts for the brand: a button-down shirt with an exaggerated collar and a subtle Western yoke.)

Click through to view the entire Calvin Klein fall 2018 collection.