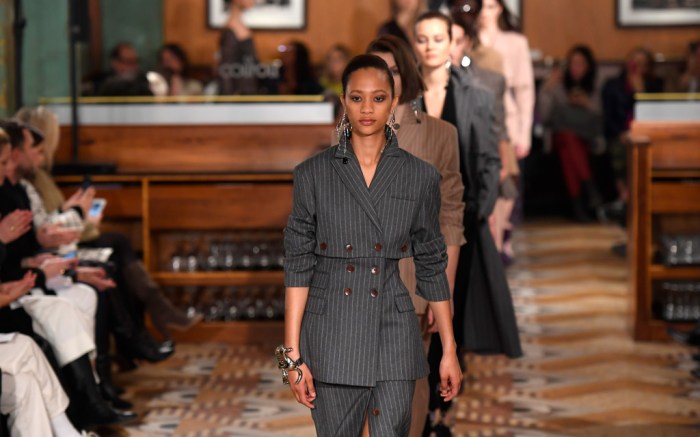 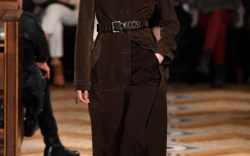 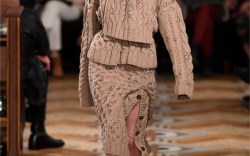 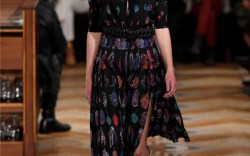 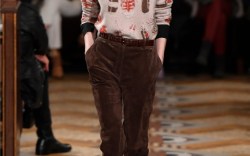 Joseph Altuzarra was born and raised in Paris. And as of last season, he’s now showing his collections here, too. Today’s venue — art deco brasserie La Coupole on Boulevard Montparnasse — is about as Parisian as it gets. While the location was traditional, the collection was anything but, with an introduction to a reinvented French-girl look geared toward a whole new generation.

The designer started from the ground up with a chic and glossy take on the biker boot: slick, to the knee, and in colors ranging from black to an opulent plum and even a spacey metallic silver. There were also edgier cutout boot versions, with an ankle cuff secured to the body of the shoe via a ring that called to mind a piercing.

“I wanted the footwear to be a juxtaposition with the clothes,” the designer told FN after the show. “It was based on the biker boot and things that were very urban; things that I wanted to wear as a teenager but didn’t as I wasn’t cool enough.”

The collection as a whole was based on memories of the women in his orbit while he was growing up, but it was also inspired by his current circle of friends.

“I grew up in the 7th arrondissement, which is very French bourgeois, so it was taking some of those codes and trying to break them up and to subvert them,” he said.

Sharp tailoring and the classic French-girl trench coat came with a layered twist, while fluid bohemian dresses had a ’70s vibe.

As for that brasserie venue: “I walked in front of this restaurant every day when I was going to school,” he said. “So when I found out they’d never done a show here, I thought it would be the perfect place.”

FN was sitting next to Altuzarra’s proud father during the show. His take on the footwear? “The shoes were beautiful, but they have to be comfortable, too. I haven’t tried them, but I know the first part is good.”

Click through the gallery to see the entire Altuzarra fall 2018 collection.