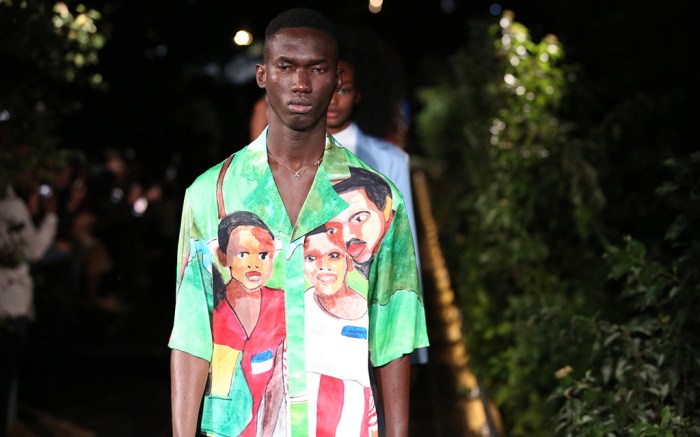 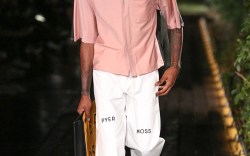 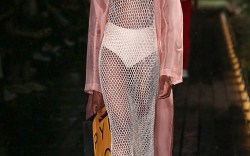 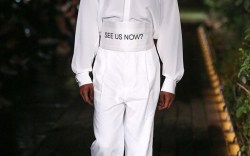 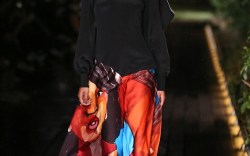 The big story behind Pyer Moss’s runway show is always about how founder and designer Kerby Jean-Raymond infuses culture, especially as it pertains to the black community. For spring ’19 he comped last season’s soulful live choir backdrop with an updated rendition and brought the fashion set to the historic Weeksville Heritage Center in Brooklyn — one of the first free black community spaces, which was founded in 1838.

This go-round, a hymnal-like tune with the words “be real black for me” serenaded the crowd as Ebonee Davis (a black model who proudly sports her natural hair) and a young boy opened the show crowned in silky white ensembles. It would set the stage for a runway (and soundtrack) that was as much an ode to the black woman as it was to the black family as a whole: “American, Also. Lesson 2.”

His penchant for boxy, oversized jackets and palazzo pants returned as a key look, while he showed a softer side by way of mesh, fringed dresses and high-low pleated skirts. To drive home his celebration of African-American culture, he even threw a FUBU collaboration in the mix. Jean-Raymond stuck to a primary color palette of red, yellow and blue, including an abstract geometric print, while artwork by Derrick Adams provided graphics that represented facets of black life and individuals.

Based on last season’s successful Reebok collaboration, there was also much anticipation around his second edition with the athletic brand. After a gospel transition of F.L.Y.’s classic rap hit “Swag Surfin,” the co-branded looks were revealed and as it turns out, the ’90s bug has bit Jean-Raymond as well. He presented old school nylon tracksuits along with a sporty maxi dress (as seen on Selah Marley) and of course, a new Reebok sneaker. The shoe was seen in a black and white colorway, featuring a design reminiscent of the Reebok x Pyer Moss Rcxpm Mobius Og leather sneakers.

“Blown away,” said Jackson when FN caught up with him after the show to get his thoughts on the experience.

“I’m thankful for how heavily it was for the culture. I’m so glad God was infused in it. I feel like those things last forever. And the clothes were awesome on top of that. A lot of it I would easily wear,” he added.

Based on the crowd’s standing ovation, the sentiment rang true throughout.

Why It’s So Important to Support Black Footwear Designers