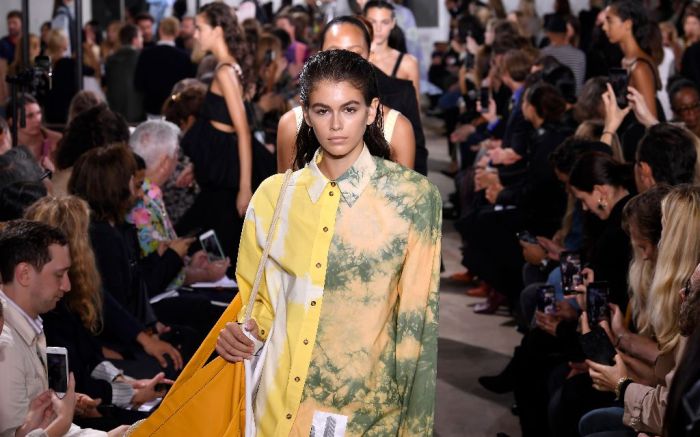 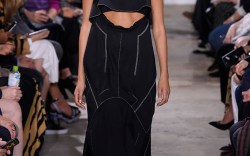 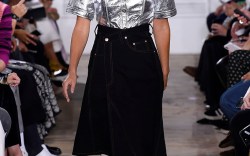 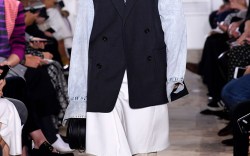 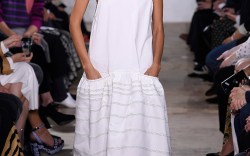 There was much ado about the exodus of designers from New York Fashion Week to Paris two seasons ago, when Altuzarra, Rodarte, Thom Browne and Proenza Schouler all announced their move. But come this season, two of the four brands have made their way back (Rodarte and Proenza) and their return has brought a renewed energy to NYFW.

Designers Lazaro Hernandez and Jack McCollough have said that they were excited to return, but instead of a big show of comeback, the duo opted for a smaller setting of only 250 attendees for their Monday show.

The collection was minimal and cool in the exacting way that the brand is known to be, with simple midi dresses with wide shoulder straps, precisely cut button-up shirts in silver metallic and pieced black leather. There were also acid-washed denim pieces in unexpected silhouettes and their now-signature tie-dye pieces, the most colorful of which appeared on model Kaia Gerber, who closed the show.

On foot, the designers did a sumptuous leather boot with a tube stacked heel and a leather tie around the ankles that gave the boots a scrunchie look. Paired with the acid-washed denim, the footwear gave a late-’80s/early-’90s vibe.

The spring pieces played on many of the brand’s signature techniques, a strategy that the designers are also employing for fall ’18. The duo has brought back some of their greatest hits in “re-editions” that are available in addition to the current collection. They include long fringed dresses and tops, macrame pieces and open knit long tank dresses. “For us, the answer has been to focus on what we do well and expand on that, tuning out the outside noise,” McCollough and Hernandez told WWD this week.

Click through to see more from the Proenza Schouler Spring ’19 show.

3.1 Phillip Lim May Have the Most Comfortable Shoes of NYFW