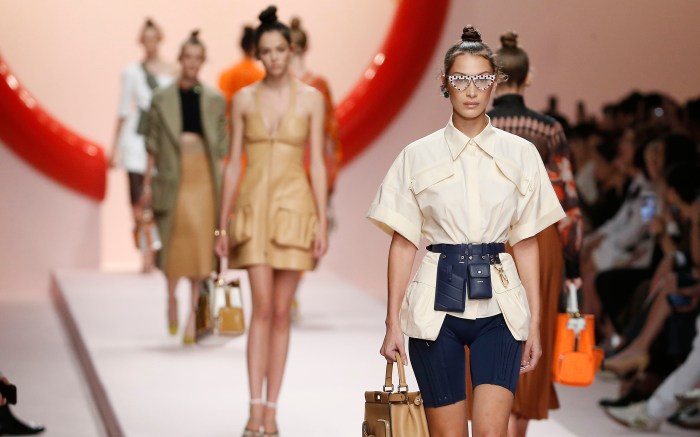 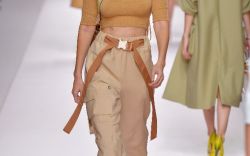 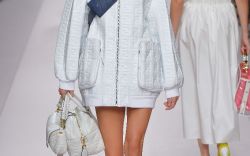 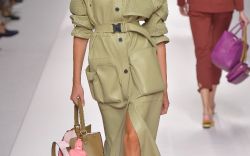 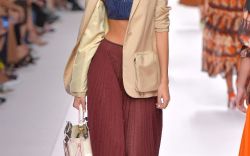 Fendi’s Western boot may be taking over street style this season, but for spring ’19, it was all about a pump and a sandal. Both were done to max capacity to match the mix of ready-to-wear and accessories that accompanied them.

Model Adwoa Aboah opened the show (which took place on Thursday in Milan at Fendi’s headquarters) with a clear PVC trench coat (an update from the brand’s coated plaid trench coats for fall) and a pair of sandals that were full of mixed media: There were leather cutouts, contrast stitching, mesh inlay and a thin black and white logo strap, plus a heel cushion that resembled a blister pad, making the entire shoe seem less precious than it looked from the front.

The sandal appeared in myriad color combinations that included pink, red, orange, aqua, purple and emerald, as did a sturdy pump, which came with a square toe, an inverted heel and a trompe-l’œil motif.

As for the ready-to-wear, there were the aforementioned PCV trenches (also done in a cropped version), but also logo-stamped hoodies (which Kendall Jenner sported) and parachute pants (on Gigi Hadid). There were even bike shorts, which Bella Hadid wore along with navy pumps, a trio of matching leather belt bags and angular polka-dot eyewear that Fendi employees were already sporting versions of in the audience. There were also plenty of logos — both on the runway and in the front row, which included Nicki Minaj, Chiara Ferragni and Winnie Harlow.

There were still intricate fur intarsia and luxe leather pieces included in the collection — signature craftsmanship hallmarks of the brand — but they were more sparse. Whether that’s due to increasing pressure to follow the fur-free trend or just the nature of a collection designed for a warm-weather season is unclear.

Click through to view the entire Fendi spring ’19 show.

How to Wear Fashion Sneakers for Fall 2018