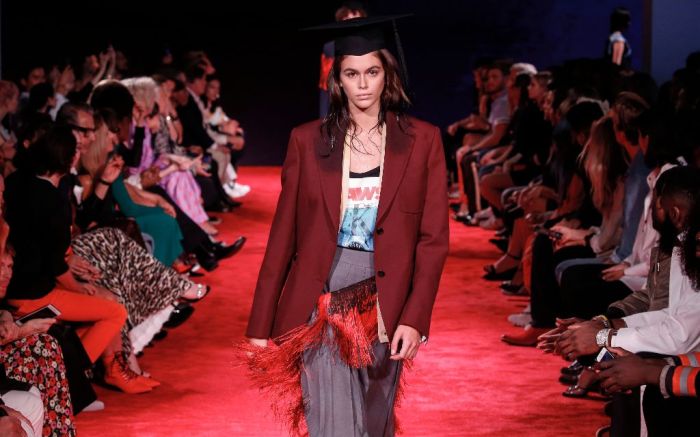 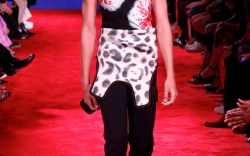 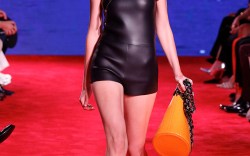 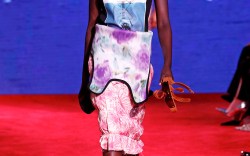 Raf Simons continues to prove he can pull in the movie stars for his Calvin Klein shows — and this season, he again brought the movies onto the runway.

Last season, he referenced the 1995 film “Safe” with Julianne Moore (and had movie theater popcorn covering the runway). The season before that, he called to mind horror movies like “Carrie,” “American Psycho” and Hitchcock films with rubber coats and sheer nightgowns.

For spring ’19, the designer went even more mainstream, cinematically speaking, referencing “Jaws” and “The Graduate.”

With the former, Simons showed T-shirts depicting the film, along with scuba-inspired separates like foldover skirts and catsuits. He also showed a series of slick footwear, like striped pumps and clear latex-looking rubber boots, which also felt like an update on his rubber coats and gloves from spring ’18.

“At the beach there is this incredible idea of beauty, but also a tension — between land and ocean, a feeling of two worlds meeting, maybe colliding. There’s a sense of the unexpected — and always, a temptation. For me, ‘Jaws’ perfectly exemplifies these notions,” Simons said in a press release on the collection.

The latter half of the show focused on a perverse version of academic garb inspired by the 1967 movie “The Graduate.” Kaia Gerber walked the runway in an actual commencement cap, but there were also plenty of men’s dress shoes in slick black leather with a pointy toe — something a 1960s graduate might have worn — and a pair of black and white pumps that looked like a riff on spectator shoes but actually had a more athletic (and collegiate) feel to them on closer inspection.

“I’ve always been fascinated by the dress codes of different generations — of mothers and daughters, fathers and sons; how the changes between different generations of families reflect the changes of American society,” Simons added. “I love the movie ‘The Graduate’ and the different family dynamics at play. Like the film, this collection explores taboos and temptations, shifts in culture and community, but ultimately, the overarching theme is love.”

The big question is: What will Raf watch next?