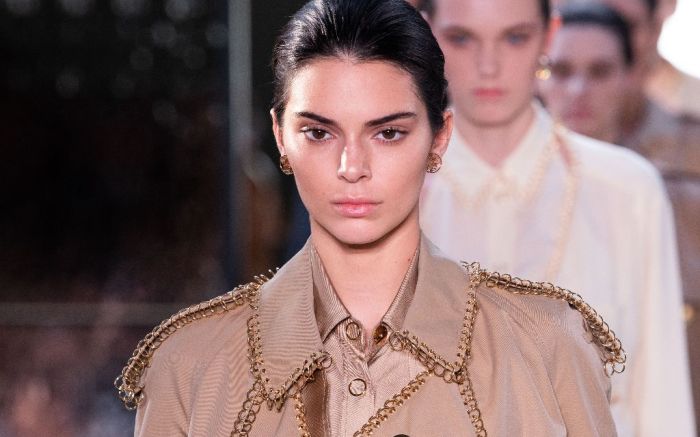 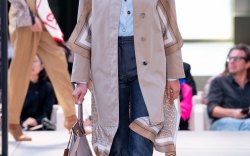 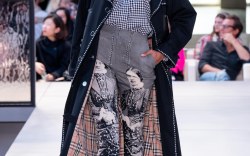 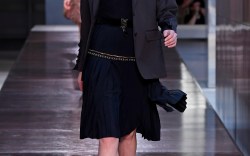 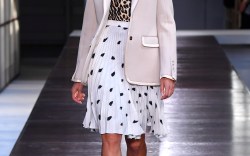 When Burberry announced in March that Italian designer Riccardo Tisci would take the helm as chief creative of the 162-year-old British brand, it came as something of a surprise.

In his last job as creative director of Givenchy, the designer became known for his particular brand of glam and sexed-up goth that produced celeb moments like Beyoncé’s naked dresses at the Met Gala and Nicki Minaj lyrics on the custom skintight pieces that he created for her.

But there was none of that present at Burberry’s spring ’19 show today — in fact, the event was devoid of any celebrity on the front row. The runway did have a few big names, most notably Kendall Jenner, who made her first fashion month appearance in the show, wearing a classic khaki trench coat accented with gold metal rings that resembled hoop piercings, which gave off a prim-punk vibe.

Elsewhere, there were other hints of punklike details, such as a pair of screen-printed denim trousers, a studded black trench coat and a pair of black leather Mary Jane T-strap creepers, worn by model Jourdan Dunn in a vintage teddy girl look.

But for the most part, the collection was quite tame, especially given Tisci’s known capabilities with black lace, embellishments and his infamous facial jewelry. There were virginal white socks worn under ladylike metallic pumps and round-toe ankle-strap heels — one in a classic Burberry check, another in a Cruella de Vil Dalmatian print.

Tisci also showed menswear in the show, and it was in this category that his past obsession with streetwear seemed to shine. He presented his signature red in hoodies and shorts as well as a pair of shorts with the Burberry check done in a horizontal stripe. And though the streetwear looks were coupled with simple oversized black and white sneakers, more dressed-up menswear looks had actual dress shoes.

The show felt like a subversive take on both Tisci’s provocative aesthetic and Burberry’s conservative look, meeting somewhere in the middle.