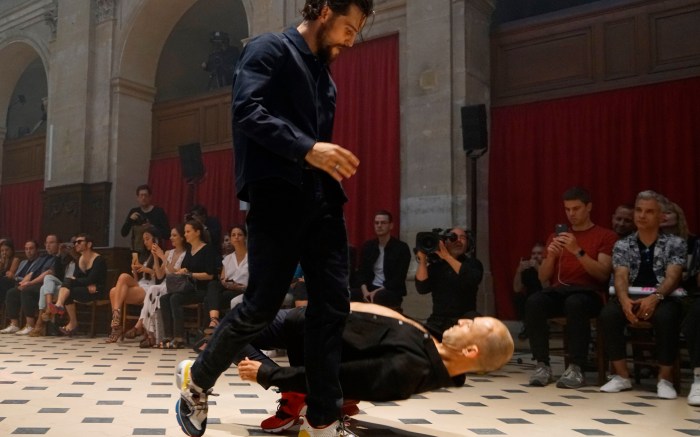 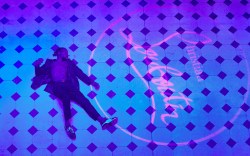 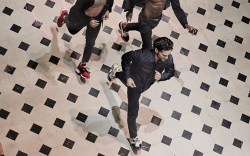 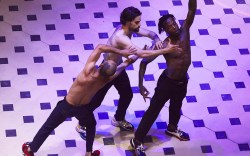 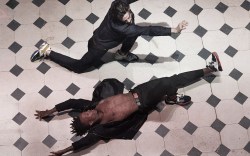 Built for speed, there are neoprene sock-style uppers while technical foams in the soles allow for maximum cushioning. But these aren’t just sneakers — these are Louboutin sneakers, so there’s an abundance of Loubi Tag graffiti prints. As for the neoprene socks, they come punctured with the brand’s signature spikes.

Last night in Paris, the designer proved the shoes weren’t just for show. He put them though their paces with a high-octane dance performance in L’Oratoire du Louvre starring French actor Kevin Mischel. The self-taught street dancer is soon to appear in “Break,” a movie about urban dance by Marc Fouchard.

As a teenager, Louboutin worked as an assistant at a Paris cabaret, the Folies Bergère, so the dance element — albeit a more contemporary one with the odd head-spin thrown in — was a no-brainer. Following the performance, FN headed off to the nearby showroom with a celebrity squad of new-gen devotees like Christian Combs and Quincy Brown for a private preview of the full spring ’19 collection.

This regal vibe segued into a Royal Navy story with highlights including skater shoes embroidered with rearing chargers and slippers bearing colorful rosettes straight out of the winners’ enclosure. Tailoring-inspired details of English flannel and French wool came collaged onto oxford lace-ups, while new Chelsea boots had the look of jewelry with the application of intricate Milanese webbing to the heels.

The most beautiful shoes in the collection were black velvet dress slippers, with each foot depicting a gold embroidered lion’s paw. They proved that Christian Louboutin is officially king of the urban jungle.

Quincy Brown’s take? “It’s a new way of showing kinsmanship. Normally you just get the lion’s head. I like it,” he said.