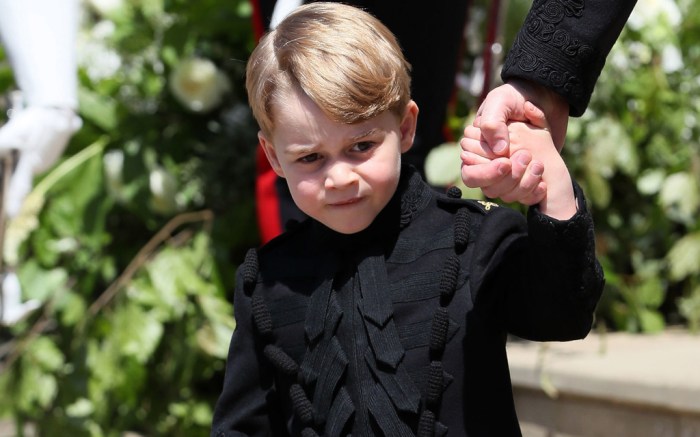 Prince George made an adorable pageboy at the royal wedding in Windsor, England today as he watched his uncle, Prince Harry, marry Meghan Markle.

As one of four pages at the wedding, Prince George wore a pint-sized version of the outfits sported by his father Prince William and uncle Prince Harry.

He sported a miniature Blues and Royals frockcoat, which draws its insignia from the regiment to which both Prince William and Prince Harry once belonged. Made by tailors Dege & Skinner, the coat is made of blue doeskin and is single-breasted in style, with a standup collar.

Each of the four pages’ coats features his initials embroidered in gold on the shoulder strap, adding a personal touch to the standard outfit.

The boys’ leg garments are made from blue/black wool barathea, with scarlet stripes fastened with a leather strap.

While Prince George served as pageboy, his sister, Princess Charlotte, was one of the bridesmaids and wore a sweet flower crown to complete her look.

Both Prince George and Princess Charlotte are familiar with their roles in the wedding. When aunt Pippa Middleton married James Matthews last May, the duo played the same roles in her wedding.

Meanwhile, their younger brother, Prince Louis, who was born just a few weeks ago, did not attend the wedding.

Click through the gallery to see more of the guests at the royal wedding.