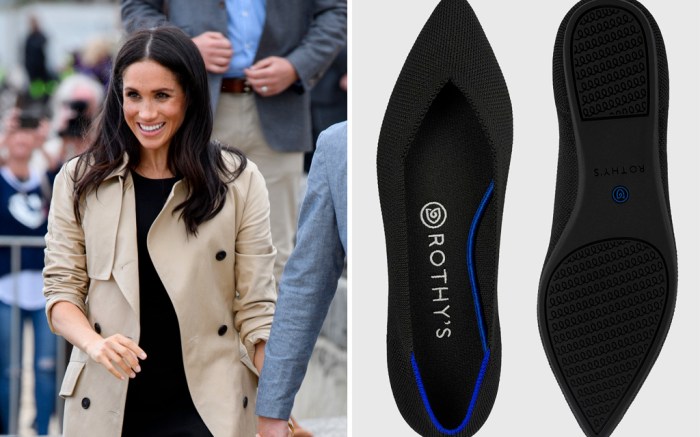 Launching in 2016, the San Francisco startup has garnered a cult following for its shoes made out of plastic water bottles. That following now includes the Duchess of Sussex.

During her recent Australian tour with husband Prince Harry, Markle swapped her heels for a pair of the company’s signature flats. Now, Rothy’s is seeing a serious boost in sales.

She added, “We’re thrilled to see that Meghan is a genuine fan of Rothy’s because we’re all huge fans of hers. We love to see organic love for the brand build. The whole team is excited that Meghan’s decision to swap her heels for flats has introduced so many new women to the brand, and inspired them to do the same.”

Online users almost doubled, and both organic and direct traffic was up 3 to 4 times after Markle was spotted in the shoes, according to Cooper. Plus, other styles saw the residual impact with sales for the Grey and Leopard Point colorways almost doubling.

Rothy’s core DNA is all about sustainability, which has captured the attention of Markle, who has been sporting other eco-friendly brands.

Founders Stephen Hawthornthwaite and Roth Martin created Rothy’s unique concept following several years of extensive research. The goal has been to reduce waste in every step of the shoe-making process.

Cooper explained, “With sustainable manufacturing practices as a baseline, we can build a collection of beautiful products that don’t necessitate waste. In addition to manufacturing, we think about sustainability in our materials, the extended lifespan of the washable shoe, and close control of the supply chain so we’re not over-producing.”

Here’s how it works: The process starts with approximately three discarded plastic bottles, which are stripped of caps and labels. The company sources plastic bottles in bulk from recycling centers around the world. It is then hot-washed, chipped into flakes and made into small beads.The material is then fused into filament fiber to make an environmentally friendly yarn, and a special 3D knitting process reduces waste by crafting the footwear without seams to essentially knit a shoe using the exact amount of material needed.

Rothy’s is direct-to-consumer and shoppers can also get a pair of shoes at their first brick-and-mortar store on San Francisco’s Fillmore Street.