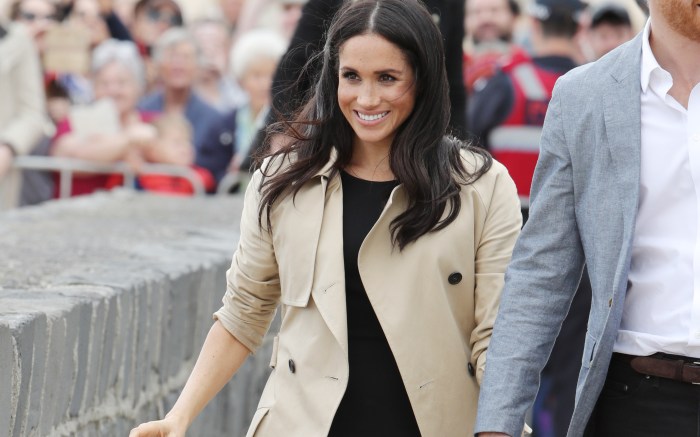 During her recent Australian tour with Prince Harry, Markle did the most relatable maneuver ever and swapped out her heels for a pair of flats — twice. Rothy’s pointed-toe shoes are known for comfort and ease, not to mention the focus on sustainability, so it’s no wonder why Markle is fan.

Here’s everything you need to know about the brand.

1. The shoes are made from plastic water bottles.

Rothy’s manufacturing process used to create a pair of the flats sources recycled fiber from approximately three discarded plastic bottles, which are stripped of caps and labels. The company sources plastic bottles in bulk from recycling centers around the world. It is then hot-washed, chipped into flakes and made into small beads.The material is then fused into filament fiber to make an environmentally friendly yarn, and a special 3D knitting process reduces waste by crafting the footwear without seams to essentially knit a shoe using the exact amount of material needed.

2. There are 4 different silhouettes available for purchase.

While the ballet flat has been a hit with customers, other popular styles include last month’s launch of the sneaker, the point flat and the loafer. They retail from $125 to $165.

Founders Stephen Hawthornthwaite and Roth Martin created Rothy’s unique eco-friendly concept following several years of extensive research into how shoes are made and officially launched in 2016. Hawthornthwaite, a former investment baker, takes the lead as CEO, and Martin, the San Francisco native and former gallery owner, is on design as the chief creative officer.

The goal has been to reduce waste in every step of the shoe-making process. For example, the rubber soles are made carbon-free. The company has succeeded in diverting nearly 18 million bottles from landfills into shoes, and it continues to expand.

The direct-to-consumer brand opened its first brick-and-mortar store on San Francisco’s Fillmore Street in May.

Weighing in at 9.3 ounces, which is just barely a half a pound, Rothy’s knit shoes feature quick-dry technology. The shoes also include a removable insole, which is also washable. Be sure to air dry only and use a delicate cycle in only cold water and mild detergent.

Targeted to kids ages 4 to 11, the girls’ offering launched in July and focuses on mini versions of the brand’s classic loafer silhouette in a palette of 10 colors and patterns. All of the styles are priced at $65 a pair and available at both Rothys.com and the Fillmore shop.

Click through for more looks from Meghan Markle’s royal tour of Australia.