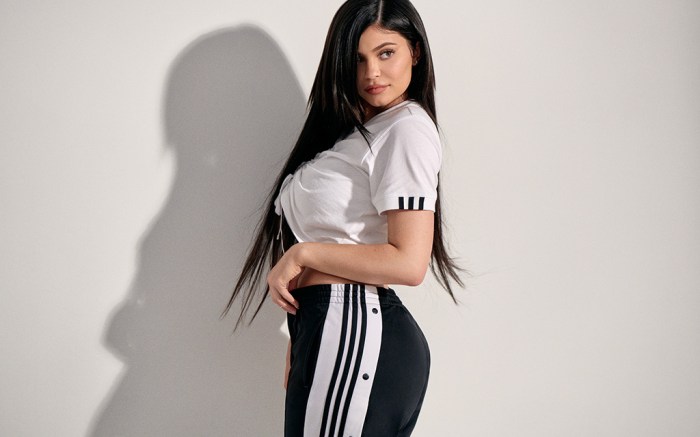 Kylie Jenner just joined Adidas and her first campaign is already here. The social media influencer and beauty guru stars in the athletic brand’s new Falcon ads for fall ’18, which takes us back to the year 1997.

It was the year the Adidas Originals Falcon Dorf runner debuted and the year Jenner was born. Fast forward two decades and Adidas is looking back at ’90s-roots while Jenner is emerging as a soon-to-be fashion icon and the company’s latest partner.

For Adidas’ newest female silhouette, the Falcon, which has already garnered much buzz, Jenner stars in her debut campaign. Bridging nostalgia and modernity, Jenner is seen posing in tear-away track pants, bike shorts, denim and the new Falcon shoes.

The sneaker certainly stays true to its heritage, but gets a major update in a grey, pink, black, and blue colorway, and key features including a paneled construction in classic mesh and suede overlays, a molded heel unit, reflective detailing and a rubber midsole.

“With Falcon we are continuing to develop the Adidas Originals narrative. We are interested in creating tomorrow’s streetwear by reinventing the most iconic sportswear from our archives. Falcon is inspired by the Falcon Dorf,” said Alegra O’Hare, VP global brand communications, Adidas Originals and style. “Its bold and unapologetic DNA is at the core of today’s Falcon and reflects the confident mindset of a new generation of female creative consumers.”

Now, Adidas is a family affair as sister Kim Kardashian’s husband, Kanye West, famously works with Adidas on his Yeezy line, while sister Kendall Jenner is also a brand partner.

The Falcon campaign will launch globally on Sept 6, and the shoes will be available at Adidas Originals stores worldwide and on adidas.com/falcon.

Click through the gallery to see the full campaign and all the behind-the-scenes action.