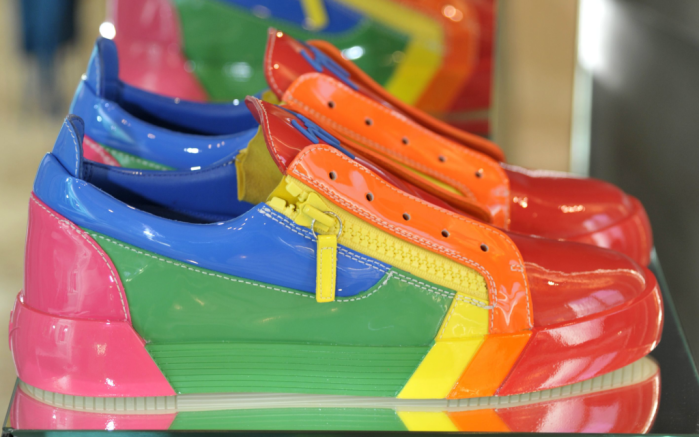 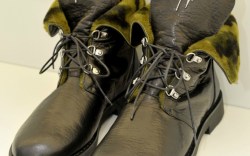 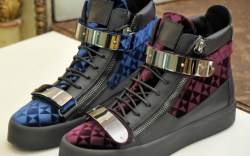 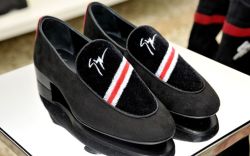 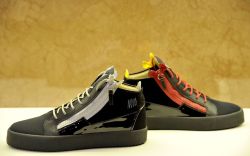 And it wouldn’t be a Zanotti collection without a curveball, which this season took the form of a rainbow sneaker. “I love black, but these sneakers will be delivered in June,” the designer told FN. “There’s no more winter and summer, so it reflects that.”

Each section of the shoe has been hand-decorated with a different color. “This final result is more emotional than when it’s done via an industrial process,” Zanotti noted. “It costs nearly 40 percent more, but it’s 300 percent more beautiful.”

The rest of his collection drew on elements from streetwear, sport, biker, combat and rock ’n’ roll. “It’s a new interpretation of our black universe, using our codes along with memories from my own generation,” said the designer.

Particular models that epitomized the theme included biker style mid-calf boots where the top could be removed, turning them into a pair of ankle boots. “There’s a zipper just like on a biker jacket, so you can transform them into a combat boot,” he explained, giving FN a quick demonstration lest there be any doubt.

Another novelty involved a black velvet runner where part of the sole was done in metallic gold. “It’s a super-thin coating done by a special machine they use for cars; it’s a molecular spray with charged particles,” he said. Last year, he debuted a spray-on velvet coating also borrowed from the automobile industry.

Similarly there were sneakers and classic loafers that came with removable chunky sock-style uppers. “I took the idea of the sock from the world of sport and 1960s tennis players,” he explained. “You can take them off and wash them in the washing machine.”

To see more styles from the presentation, check out our gallery.