Did Queen Elizabeth Snub President Trump By Wearing This Accessory? 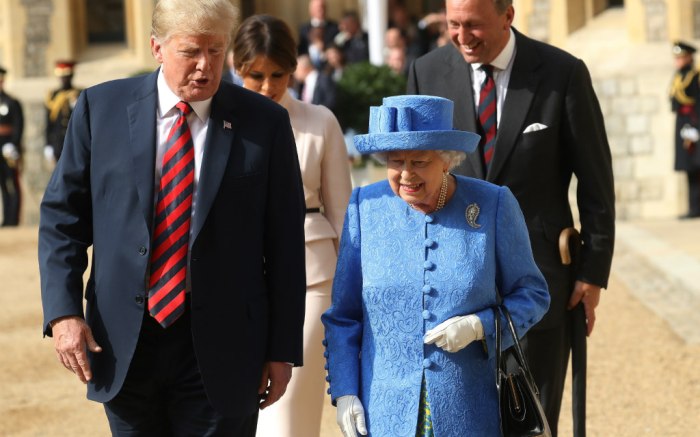 Throughout her long reign, Britain’s Queen Elizabeth has stayed far removed from the political fray as her position as constitutional monarch dictates.

But some eagle-eyed royal watchers believe Her Majesty sent a subtle political message with her choice of brooches during U.S. President Donald Trump’s visit to the U.K. last week. On the day of Trump’s arrival in England on July 12, the queen adorned her silk leaf-print dress with a small green flower brooch given to her by none other than former U.S. President Barack Obama and his wife, Michelle, with whom she developed a personal friendship during the couple’s eight-year tenure in the White House.

Hand-selected by the Obamas from Connecticut jeweler Tiny Jewel Box’s vintage assortment, the brooch was crafted in 1950 from 14-karat yellow gold, diamonds and moss agate. They presented the gift to the queen during a 2011 visit to Buckingham Palace. Considering the immense size of the Monarch’s collection of glittering brooches — a signature accessory of hers — the choice to wear a piece presented to her by the Obamas seems far from coincidental. Was she sneakily signaling her disapproval of America’s current president?

On Trump’s second day on British soil, he joined the queen for tea at Windsor Castle. For this occasion, Her Majesty made yet another curious brooch selection: the diamond palm leaf piece that her mother, Queen Elizabeth, wore to her father King George VI’s 1952 state funeral. The brooch appears in the iconic and haunting Three Queens in Mourning photo taken at the funeral in which Elizabeth, her mother and grandmother Queen Mary  — representing three generations — huddle together in their heavy black mourning clothes and veils. Royal fans believe the queen was making a bold statement in wearing jewelry linked to such a painful day from her past to meet Trump for the first time.

The day after her tea with Trump, Her Majesty welcomed another round of important guests to Windsor, King Philippe and Queen Mathilde of Belgium. She accessorized her purple and blue floral-print dress with a snowflake brooch given to her in 2017 by the Canadian people to mark her sapphire jubilee. Again, her choice seems significant, considering Trump’s recent Twitter attack on Justin Trudeau after the Canadian Prime Minister criticized his trade policies, igniting a feud between the two neighboring leaders.

See more of Queen Elizabeth’s shoes through the years.