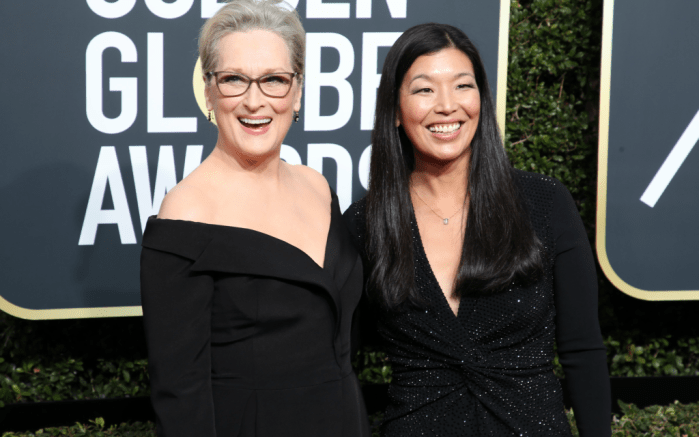 Meryl Streep is among those to attend this year’s Golden Globe Awards with a female activist.

Walking the red carpet with Ai-jen Poo, the director of the National Domestic Workers Alliance and co-director of the Caring Across Generations Campaign, both women wore black in solidarity with the Time’s Up movement, protesting against sexual abuse and harassment.

Streep, who is nominated in the Best Actress category for her role in Steve Spielberg’s “The Post” tonight, appeared elegant and timeless in a long-sleeved off-the-shoulder gown, which she paired with glasses, her signature go-to.

The 68-year-old award-winning actress also carried a black clutch for the evening, while Poo wore a similar-style long-sleeve dress.

“She and I are so happy to be here in this particular moment,” Streep told E! News, before adding that they feel “emboldened” to “stand together.

For more style on the red carpet at the 2018 Golden Globes, check out the gallery.