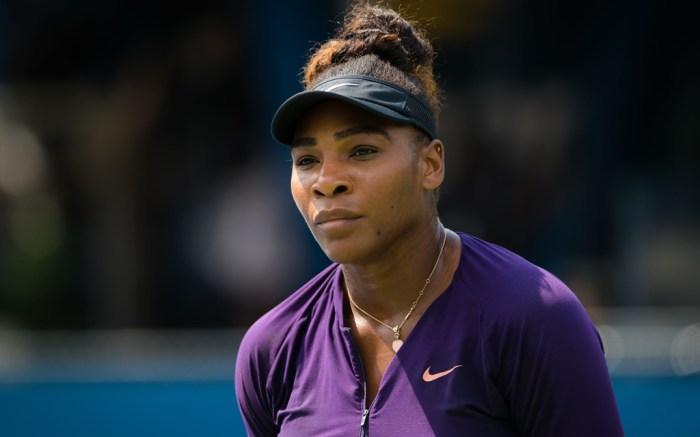 When it comes to the French Open’s catsuit ban, it seems that Serena Williams is the only one who isn’t angry.

After the president of the French Tennis Federation announced a stricter dress code for next year’s tournament — specifically calling out the superhero-like Nike catsuit Williams wore as unacceptable — social media was enraged by the restrictions.  Nike, Andy Roddick and Billie Jean King all took to Twitter to share their support for the 23-time Grand Slam winner.

But Williams herself shrugged off these concerns in a press conference at the U.S. Open yesterday.

“I think that obviously the Grand Slams have a right to do what they want to do,” she said, adding that she has spoken to the Federation’s president, Bernard Giudicelli, and that they have a good relationship.

Much of the criticism was directed toward Giudicelli, who said of the catsuit, “[It] will no longer be accepted … One must respect the game and the place.”

Although Williams’ ensemble certainly made a fashion statement, it was also a practical measure, with the compression tights regulating Williams’ blood circulation in the wake of post-pregnancy health complications.

Williams said she had since found other ways to manage her blood circulation but that she believes the French Open would be fine with health-related clothing decisions.

“If they know that some things are for health reasons, then there’s no way that they wouldn’t be OK with it. So I think it’s fine,” the tennis pro said.

Williams’ first U.S. Open match is Monday, but don’t expect to see her in a catsuit on the court anytime soon.

“When it comes to fashion, you don’t want to be a repeat offender,” Williams said. She’ll be wearing a buzzed-about Virgil Abloh-designed look as she steps out Monday. She will square off against Magda Linette in the first round.

Click through the gallery to see more of Serena Williams’ on-court style.