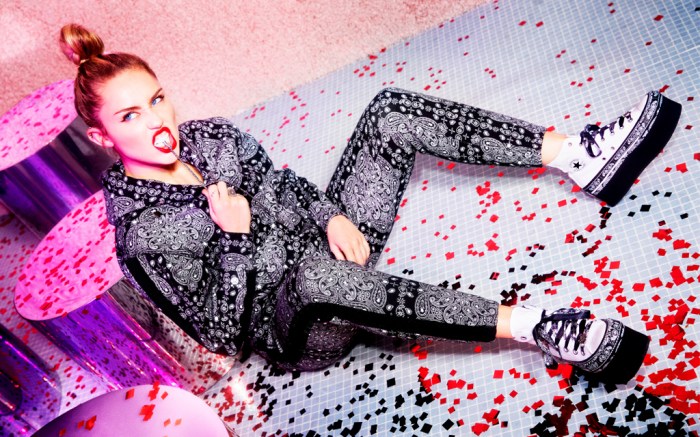 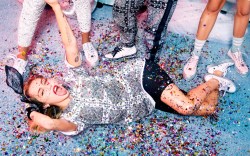 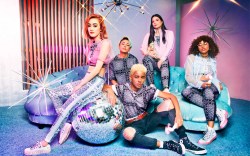 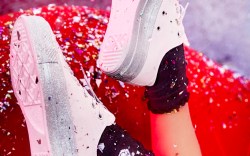 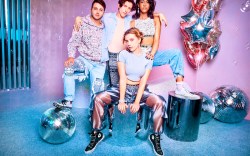 Bring on the sparkle!

After months of social media teases, this morning, Miley Cyrus finally revealed the first official images for her much-anticipated Converse collaboration — and the release date, which is only one day away.

As we would expect from Cyrus, the collection is all about glitter and fun — and the fans. “I definitely had my fans in mind and in my heart when I was creating,” she revealed in a statement. “I put what they love about me and what I love about them into the design.”

Indeed, the campaign images, which were shot by Ellen Von Unwerth, feature the music superstar at her most bold and playful in a wild party atmosphere. With confetti raining down from the ceiling, she sports head-to-toe looks from the debut Converse x Miley Cyrus collection, including Chuck Taylor All Star platforms decorated with glitter or bandana-inspired prints (a clear nod to her country roots).

But the collection also comes with a message. Cyrus designed the apparel and footwear with an emphasis on inclusivity: “No age, no gender, no sex — I wanted everyone to feel included,” the 25-year-old said in the statement.

That goes for the products as well as the campaign. Cyrus and Converse invited some of her biggest fans to star in the look book, and they vary in terms of gender, orientation and background.

Click through the gallery to see more photos from the lookbook.

Cyrus, who is an active advocate for the LGBT community, has long promoted a message of empowerment among her fans. And she noted that was one reason she chose to work with Converse. “I’ve always identified with Converse because the brand appeals [to] and represents so many different cultures and walks of life. And they’re accessible,” she said.

The first Converse x Miley Cyrus collection will launch on May 2 and is quite a doozy, boasting 43 SKUs, including several versions of the Chuck Taylor All Star, as well tracksuits, hoodies, dresses, hats and backpacks.

The line will be available worldwide on Converse.com and at select retailers.

25 of Miley Cyrus’ Most Outrageous Outfits