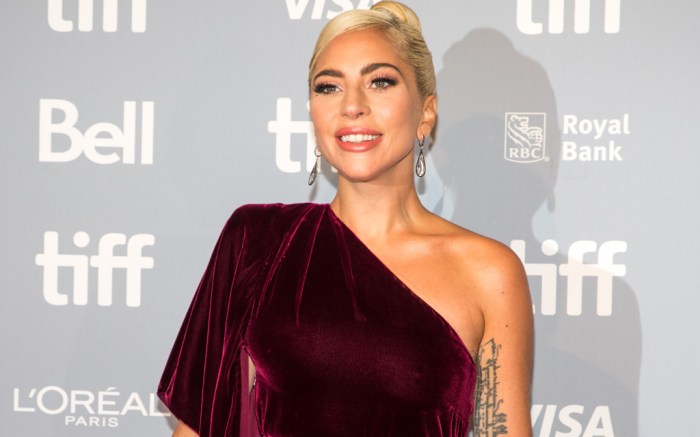 Lady Gaga may be known for her wild red carpet looks, but she opted for a more subdued ensemble at the Toronto International Film Festival today.

The”Born This Way” singer sported a one-shouldered, velvet dress in a burgundy color way that almost matched the red carpet while promoting “A Star is Born.”

For footwear, the star forewent her sky-high stompers in favor of a pair of classic black pumps. The shoes, which appeared to be suede, featured a stiletto heel and pointed toe.

Gaga was joined for a press conference by co-star Bradley Cooper, who also made his directorial the film. Cooper kept things casual in a blue T-shirt, jeans and brownish Chelsea boots, completing his look with an oversized navy jacket.

“I think Bradley is an incredible filmmaker,” Gaga told Variety of her director. “I have acted before, but I’ve never been the lead actress of a feature film. Every day on set was such a thrill to watch him work. You can see the gears turning while he’s working even when he’s in character.”

While the movie has yet to premiere in the U.S., it’s already been lauded by critics as a potential Oscar contender.

Click through the gallery to see some of Lady Gaga’s wildest shoe moments through the years.