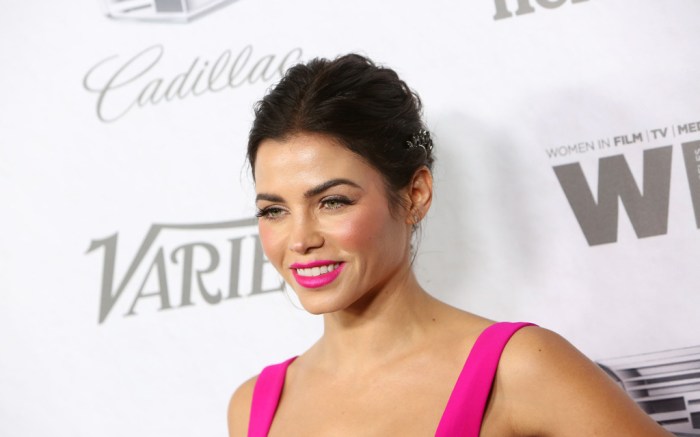 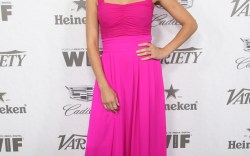 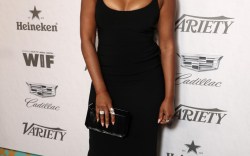 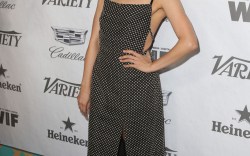 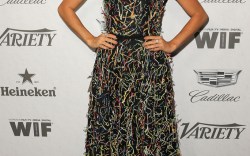 Jenna Dewan popped on the red carpet at the Variety Women in Film party in Los Angeles Saturday night.

The “Supergirl” star sported a tank-top with flowing, wide-legged pants, both in the same fuchsia shade. For footwear, she kept the hot-pink theme going, rocking metallic pink sandals that went perfectly with her monochrome look.

Dewan’s beauty look also played into her head-to-toe pink outfit. The 37-year-old went for a bold lip that perfectly matched her ensemble.

While Dewan was pretty in pink, Alison Brie went for a standout look that had a bit more edge to it. The actress chose a leopard-print black and blue Dundas minidress that featured exaggeratedly large shoulders. She paired the daring dress with Christian Louboutin sandals that tied at the ankles for a look that was all about the legs.

Never one to play it safe, “Queer Eye” star Jonathan Van Ness too made a red carpet statement. The groomer wore a blue and white striped shirtdress, which he paired with patterned boots that went almost up to his knees.

Another standout look came courtesy of Tiffany Haddish. The “Girls’ Trip” star went for an understated yet stylish look, sporting a formfitting black dress that showed off her curves and black ankle-strap sandals.

Click through the gallery to see more looks from the Variety Women in Film party.

How to Watch the Emmys Red Carpet Live Stream