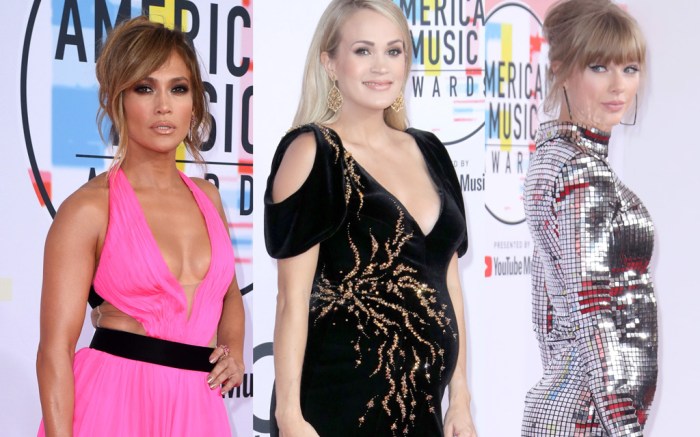 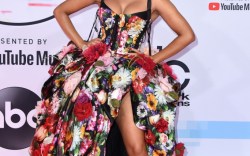 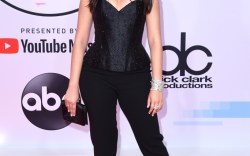 There was no shortage of standout looks on the red carpet at the American Music Awards in Los Angeles tonight.

One star to nail her look was Carrie Underwood. The country starlet — who is pregnant with her second child — stepped out in a leggy black gown with golden embellishment and a thigh-high slit. For footwear, she rocked bronze pumps with embellishments.

Another star who got it right was Jennifer Lopez. Like Underwood, Lopez opted for a leggy look. The “Jenny From the Block” singer stunned in a pink Georges Chakra gown with a sensual slit, completing her look with sky-high black platform sandals from Jimmy Choo.

While Taylor Swift has not attended many award shows in recent years, the “Look What You Made Me Do” singer proved she hasn’t forgotten how to make a splash on the red carpet.

Swift sported a disco-ball-like minidress from Balmain with matching thigh-high boots. While the look marked a risk in comparison to the more traditional red carpet looks other stars sported, it paid off for the pop-star.

Speaking of risks, Amandla Stenberg took, perhaps, the biggest risk of all, choosing denim for her AMAs appearance. Known for her work on “The Hunger Games,” Stenberg paired high-waisted jeans with a tuxedo jacket and bow tie — and it worked surprisingly well. Pulling the 19-year-old’s look together was her footwear by Brian Atwood: a pair of shiny black boots with a pointed toe.

Click through the gallery to see more of the best-dressed stars at the AMAs.

Post Malone Stomps Out in Glittery Boots — and the Craziest Accessory, Plus More Stylish Men at the AMAs