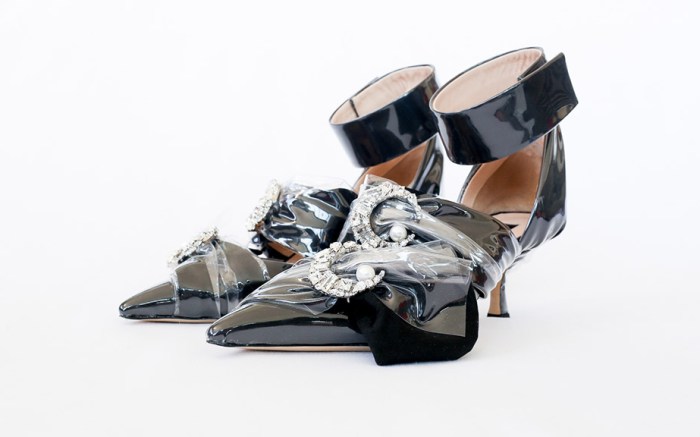 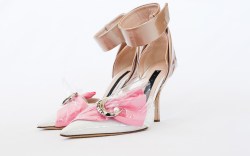 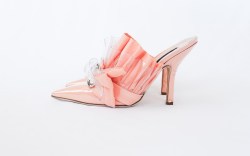 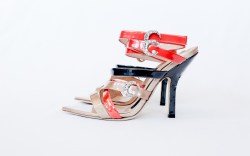 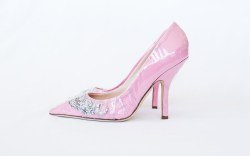 Showcased in Paris during couture week, drapes, pleats and quilted silks came swathed in PVC and finished with crystal and pearl buckles evoking a lunar eclipse, which is is also her logo.

Silhouettes ranged from pumps to ankle boots and collection highlights include a ruffled orange mule and pale blue crystal studded pump with a fan of PVC at the rear. The ruffled effects recall the shape of a seashell.

Her Midnight line started as a collaboration with Cesare Paciotti when the Italian label hired her last year to revamp its women’s footwear. Her business partner, Marco Calcinaro, is Paciotti’s CEO.

“Midnight for me is the fairytale, the dream, the magic,” she said. “The inspiration was creating a dream.” So she dreamt up the most iconic shoe she could think of, Cinderella’s glass slipper. Hence the name and her signature PVC wraps and flourishes for a more contemporary take that she jokes is also  “party proof.”

A further collaboration followed, a Dynasty inspired capsule collection for fall 2018 with with her friend Dodo Bar Or but now, she said, “The idea needs to walk by itself, just like Cinderella.”

Going forward, however, she still plans to continue collaborating: “Midnight is a platform for creativity,” she said. “We want to create a collective of brilliant minds.”

These Florals From Olgana Paris Look Better Than the Real Thing