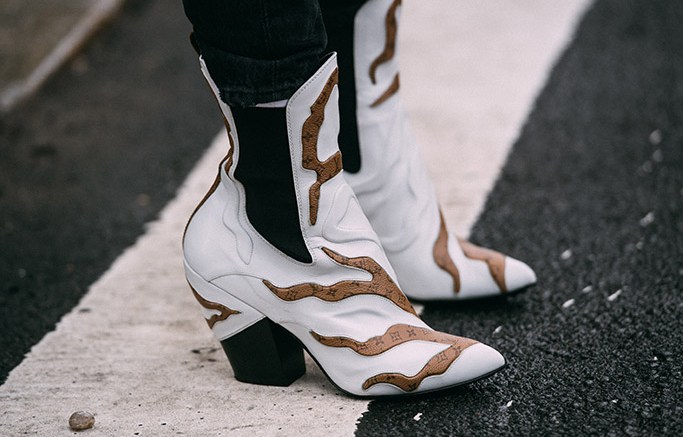 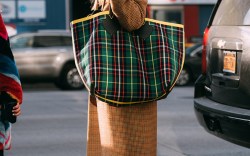 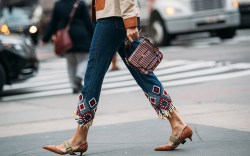 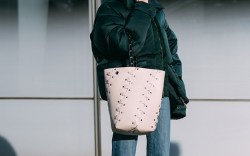 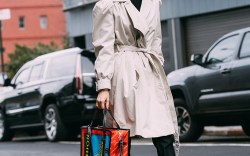 With celebs and “it” girls crowding the boroughs during New York Fashion Week (Feb. 5-14), there’s no shortage of style inspiration to gather straight from city streets. Case in point: This season’s major footwear trends like the faithful designer sneaker and the ultimate statement boot — more specifically, a nod to Americana kitsch, with Western-inspired textures and embroideries taking center stage.

Leather was spotted from head to toe, particularly through ankle boots like Louis Vuitton’s Fireball and Laurence Dacade’s Pete, a round-toe iteration featuring a layered vamp, notched collar and classic side loops. Make no mistake: Fashion girls are once again proclaiming their love affair with cowboy couture.

Another welcome return has been the moccasin — this time courtesy of Georgian designer Ketevane Maissaia, who launched Le Mocassin Zippé five years ago. The brand’s name essentially translates to its shoe’s signature concept: moccasin loafers that can be fastened — or zipped — into thigh-high boots.

At the same time, influencers trekked from show to show in ultracomfortable footwear, including Louis Vuitton’s Archlight sneaker, an oxymoronic ’90s-throwback-cum-futuristic pair with a springy wave-shaped outsole, oversized tongue and low-cut ankle. (The French fashion house is also hosting an exclusive pop-up for the so-called “ugly” shoe at its SoHo store until March 10.)

Let’s not forget one of January’s major shoe winners, the Kendrick Lamar x Nike Cortez Kenny 1 kicks that sold out just as quickly as they were released. A reference to the rapper’s critically acclaimed album “Damn,” the needlework spans the side of the sneaker and comes in high demand among fashion’s elite.

Lucite, kitten and other curious heel shapes also made their sidewalk appearances, signaling yet another fun footwear season ahead.

Click through the gallery to see more of NYFW’s best street-style looks.