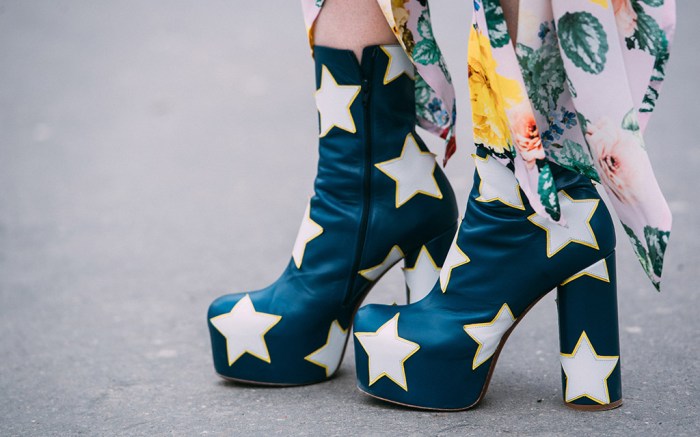 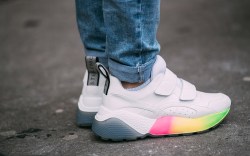 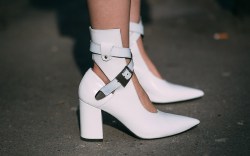 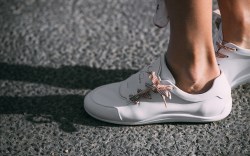 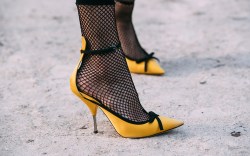 The streets of Paris were frigid during the city’s fall ’18 fashion week shows, but the shoes walking them still screamed “Saturday Night Fever.” Street style took a cue straight from a 1970s dance floor, turning the City of Lights into Funkytown itself.

A pair of Vetements platforms served as one of the most prominent examples, its 5-inch block heel making quite the statement. The admiral blue boots featured white leather star appliqués trimmed in yellow. In addition to retro silhouettes, disco ball-inspired looks also made a mark.

One attendee stepped out in metallic silver Alfredo Martinez heels. The sparkling embellishments along the exterior of the shoes, as well as the guest’s matching pants, called to mind the mirrored panels of a classic disco ball.

Aside from the pair designed by Martinez, Paco Rabanne provided another glimmering option.

This time around, a pump would serve as the base, while silver sequins covered the shoes. Here, the guest coordinated the heels with matching pants, bringing in the monochromatic dressing trend.

In addition to the ’70s style inspiration, several attendees opted to wear footwear from French brand Céline. Perhaps this was a nod to longtime creative director Phoebe Philo’s departure (fall ’18 was her last collection for the label). Without a doubt, it was a nod to great shoes.

Avant-Garde Heels Took Over the Streets at Milan Fashion Week