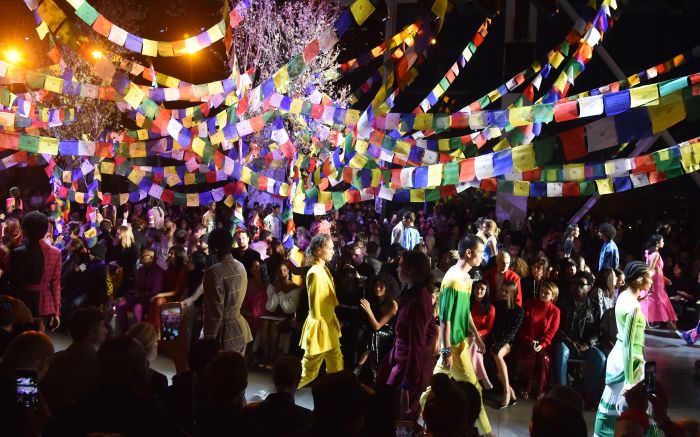 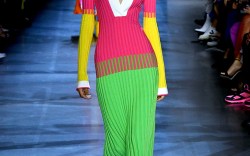 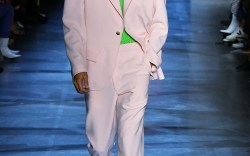 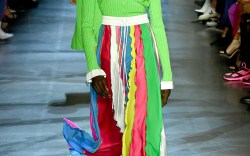 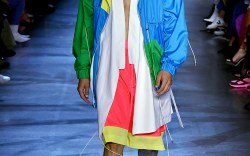 You can count on Prabal Gurung to deliver a strong message, and his spring ’19 show Sunday was no different. The designer showed a collection of rainbow hues — on the clothing, on the shoes and through his model casting — proving once more that he continues to be at the forefront of socially conscious fashion (indeed, the designer won an FN Achievement Award in 2015 for it, with the Icon Award for Social Impact).

Gurung’s first message of the show came on the seating benches. Placards read, “I AM A VOTER,” a nod to the Civic Culture Coalition’s voting initiative launched this week for the midterm election season (Chloe Gosselin also participated).

The rest of the message came in the actual show. Against a ceiling of mini flags in a rainbow of hues, models of varying colors and a few different sizes walked the runway in frocks of almost neon hues (greens, pinks, yellows and blues — you name it), with shoes just as colorful. They came in the form of mostly kitten heel sandals, some with equally bright feathers poking out the back (a growing trend for the season, as Christian Cowan’s collaboration with Giuseppe Zanotti also included feather-trimmed heels).

The colorful collection was clearly one of optimism, and Bruce Springsteen’s “Dream Baby Dream” played as models walked the finale. On his Instagram page, Gurung pointed to an inspiration trip to indigenous villages of his native Nepal and other journeys to Tokyo; London; Mumbai, India; Paris; Shanghai and Abu Dhabi, United Arab Emirates, calling it a “cross-cultural journey, one that sees no borders, tied together through our ability to use color as a universal language.”

The designer’s color language was also apparent in his new menswear, which also walked the runway. Men’s separates — mostly floral shirts and shorts, with some suiting thrown in — were done in the same saturated colors and were punctuated with the men’s shoe trend of spring ‘19: the mandal. Gurung’s version was chunky and mostly in thick black leather and slightly reminiscent of a Birkenstock (as many of the season’s men’s sandals are).