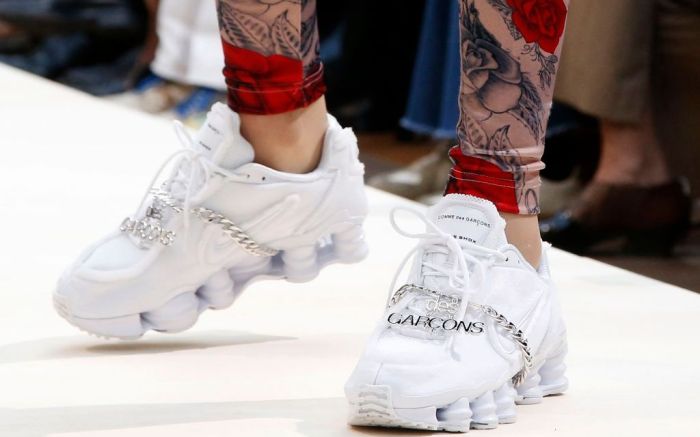 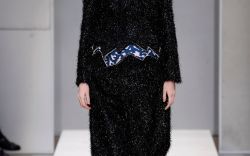 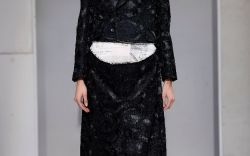 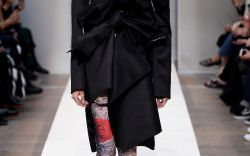 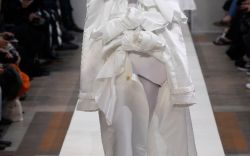 With its strategic brand collaborations, Nike has taken over Paris Fashion Week in a way that no other American brand has ever done before, and the spring ’19 season has only solidified its position as a power player in the fashion capital.

After showing new track-and-field-inspired shoes and a whole lot of activewear on the runway at Virgil Abloh’s Off-White spring ’19 show on Thursday, the athletic brand showed another runway sneaker. This time, it was at Comme des Garçons, a longtime collaborator (almost two decades) that has consistently put an avant-garde spin on the mass kicks.

In an intimate show at Paris’s School of Fine Arts, Comme des Garçons designer Rei Kawakubo sent out 30 looks done mostly in black and white. Some garments had a horizontal sawtooth slit at the pelvis, revealing maternity bumps on the models, shown with bodysuits. Others had bodysuit-covered protrusions at the hips and buttocks, referencing Kawakubo’s famous “Body Meets Dress, Dress Meets Body collection, better known as the “lumps and bumps” collection from the spring 1997 season, which was featured prominently at the Costume Institute’s “Rei Kawakubo/Comme des Garçons: Art of the In-Between” for the 2017 Met Gala.

Other looks featured thick, industrial coil chains wrapped around the body, partially hidden underneath translucent gowns with extra-long sleeves, and the models walked slowly so that the chains dragged and clinked as they made their way down the runway.

The new Nike Shox was also wrapped in chains. Done in both black and white, it was shown in a classic Shox silhouette but with updated accents, like rubber soles with a slick sheen, an oversized swoosh patch stitched onto the side and a silver or gold chain wrapped midway around the shoe, holding a pendant that says “Comme des Garçons.”

It’s the first time that the designer has done a Shox style with Nike. In the almost 20 year history of their relationship, the two brands have collaborated on more than 20 different sneakers.

Nike also announced that its Comme des Garçon Nike Cortez, a striped platfom shown in the fall ’18 show in February at Paris Fashion Week will finally be released next week.