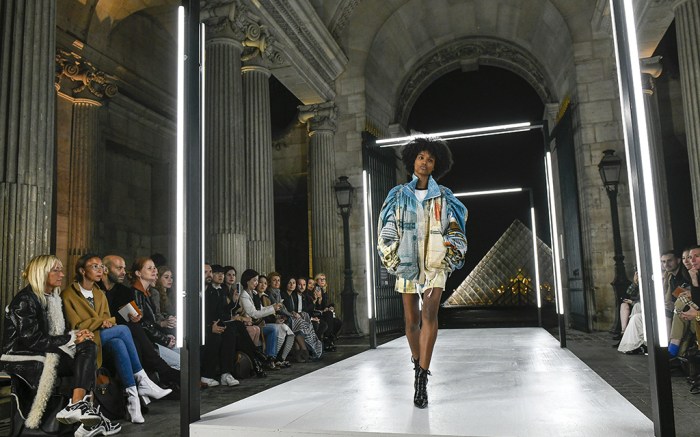 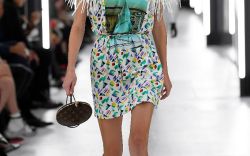 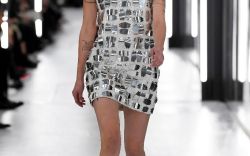 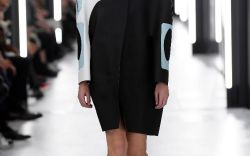 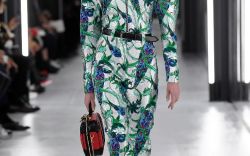 Whatever the inspiration, outer space and the ’80s were certainly on the designer’s brain.

On a futuristic runway last night that resembled the blindingly white-lit, winding passageways of a spaceship in, say, “Star Wars” or “2001: A Space Odyssey,” models walked out wearing a variety of sculptural pieces with curved space suit-like shoulders.

Equally prevalent were pieces with a brightly colored graphic print that was distinctly 1980s-inspired, done in the teal blues that defined the aesthetic.

The opening look featured a mixed pattern in a denim-looking material with the heavy ruching and blousonlike shape that was also a hit in the ’80s. It called to mind the decade’s obsession with all things outer space and the way that people imagined the future would be like, a là “Back to the Future II.”

Sadly, there were no self-lacing futuristic sneakers in the show, which would have proven more suitable for the slick runway, which caused many of the models to trip, especially in their stiletto-heeled boots.

Nevertheless, the boots were impressive. Done in black patent leather (slick on slick), a matte white and a few colors like red and pink to complement the ’80s graphic prints, the footwear sported different styles of laces and hit the ankles at a flattering point. They may not have been sneakers, but the sporty — and spacey — vibe was still there.