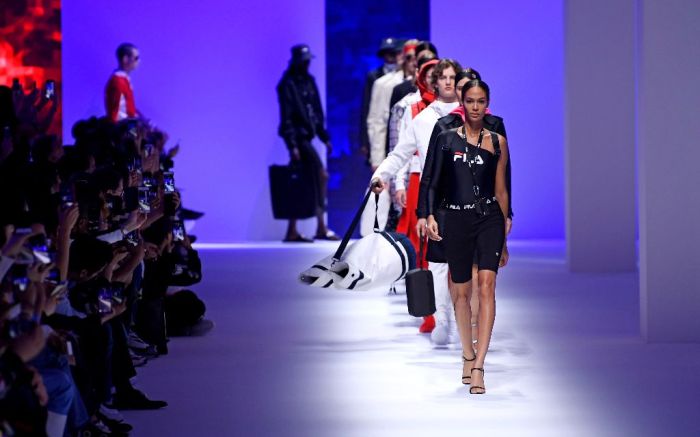 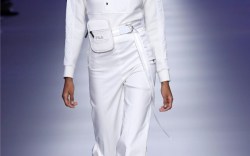 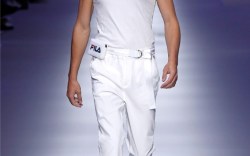 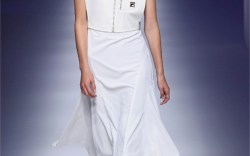 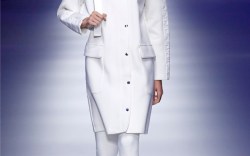 Fila’s Disruptor sneaker may be taking over street style around the world, but there was not one to be found when the sportswear company showed its first fashion show on Sunday at Milan Fashion Week.

Instead, the brand did something shocking with its footwear: It put high heels on the runway. Sporty women’s separates such as slick anoraks, retro shorts and knit zip-ups were styled with simple two-strap high-heeled sandals in black, white, red and silver metallic.

The sleek shoes elevated the looks — an intended effect for Fila, which is looking to put itself in the fashion spotlight, especially with the recent success of the Disruptor. The company’s riff on the “dad” sneaker has been the second most searched women’s product, according to online global fashion search list platform Lyst.

The heels were surprising but certainly not the most innovative footwear on the runway; that prize went to a series of trainers with hosiery-like details on top, which looked like sock sneakers on steroids. Done in red, white, black and even in a black-and-white checked print, the knit material came up to the thigh, while the rubber sole was outlined with chunky sawtooth edges similar to that of the Disruptor. The shoes were paired with sporty tank dresses and skirts.

The show was co-ed, and men’s standouts included clear and colorful anoraks outfitted with the Fila logo in various ways, plus a series of retro tennis looks on models that were dead ringers for tennis star Bjorn Borg, who was the brand’s first spokesperson in 1975 and signed on again with the brand earlier this year. Tennis whites and 1970’s polos and headbands were paired with classic white tennis shoes and striped socks.

But Borg was only one of the many vintage references in the collection, as creative directors Antonino Ingrasciotta and Joseph Graesel combed Fila’s archives to flesh out the collection. The 107-year-old brand has been keen on looking to its past: The Disruptor was originally released in 1996, and for the entirety of Milan Fashion Week, Fila held a retrospective at the city’s Triennale Museum, highlighting shoes, sportswear and campaign images from its history.

There may have been nods to the past in Fila’s show, but it also had pieces that are sure to do well with its target audience: Gen Y. The bait included logo slides (a basic requisite for sportswear and luxury fashion houses alike these days), transparent raincoats and lots of neon — Milan’s clear frontrunner for the color trend of spring ’19.