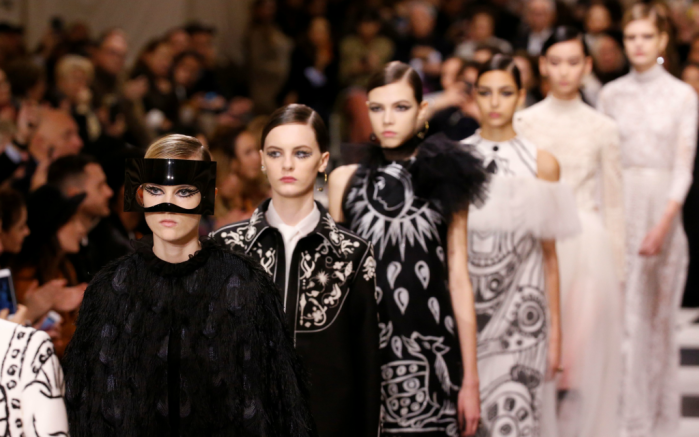 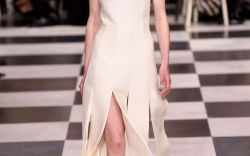 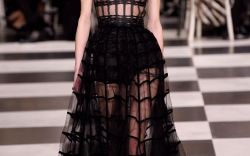 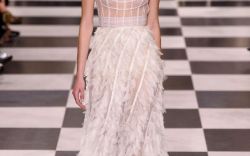 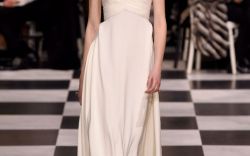 Designer Maria Grazia Chiuri immersed herself in surrealism for the Dior spring ’18 couture collection. The cage, a recurring motif in surrealist works, was represented todayt by fishnet tights, but — in true surrealism fashion — there was an additional twist: They were worn layered over gilded sandals.

Anyone looking for a way to do the “Dior Couture look” on a budget need look no further than the hosiery department. And a pair of scissors. There were also cheeky mules with ankle straps tied together by a glove, with the fingers as a decorative tassel.

Monsieur Dior had evidently been a fan of surrealism as well, as many of the gowns drew inspiration from the house’s archives in the ’40s and ’50s.

Nothing here was quite as it might seem. For instance, what at first glance appeared to be polka-dot gowns were actually an intarsia of outsize dice or domino tiles. There were plenty of optical illusions and graphic patterns. The runway was also checked, so it was difficult to know where the dresses ended and the floor began. The entire venue, a giant mirrored cuboid edifice set within the Musee Rodin sculpture garden, had been designed with the surrealism theme in mind. Inside, suspended from the ceiling, there were huge white plaster cast renderings of classic surrealist motifs, from disembodied eyes, ears and hands to giant birdcages.