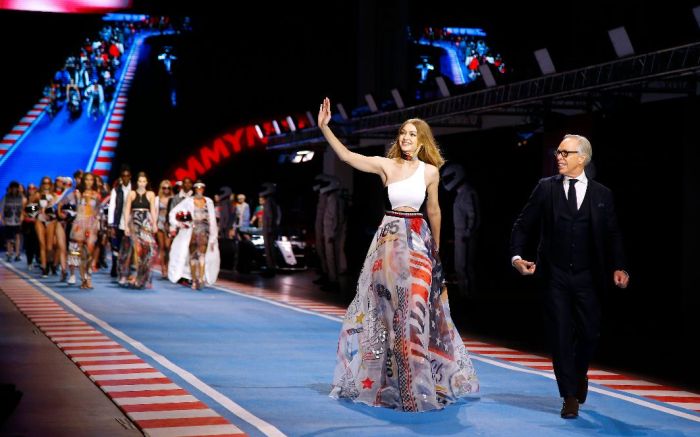 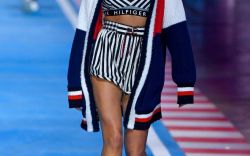 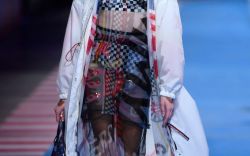 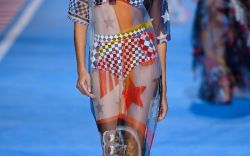 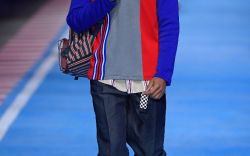 There were five Merecedes-AMG Petronas race cars in the center of the arena, a racetrack-like runway circling both the cars and a #TommyNow shop, where cropped sweatshirts, white fingerless driving gloves and checkerboard backpacks were quickly being plucked off the shelves by show-goers.

A huge video screen projected videos of Gigi Hadid, who has collaborated with the designer for the past three seasons with Tommy x Gigi capsule collections, each of which were folded into Hilfiger’s shows.

When the show finally started, none of the race cars made their way onto the runway-racetrack (as many had speculated before the show), but it was action packed nonetheless, with plenty of high-profile names walking the runway.

After more revving of engines, Hadid walked out to show the first look. She sported a cropped white tee, blue-and-red bandeau top and blue leather pants with racing stripes and black booties, followed by sister Bella in a visor, bandeau and black sneakers. Keeping it in the family, Bella was trailed by their brother Anwar in a blue leather varsity jacket and white leather low-top sneakers.

But it wasn’t just a family affair: Hadid had plenty of famous model friends join her. There was Winnie Harlow, who walked twice, first in a cropped leather jacket, gray sweatpants and nineties-esque flatform slides with racing motifs on the band; for her second turn, she wore a checkerboard monokini, visor and white anorak.

With Hilfiger’s clear success in generating traffic and sales through these high-profile, social-media-friendly extravaganzas, this latest iteration begged two questions: Why aren’t more brands following suit — and which big, young name will Hilfiger choose to work with next?