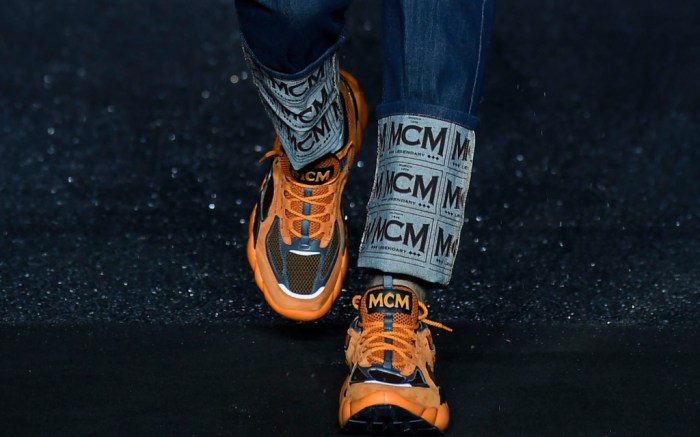 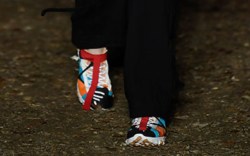 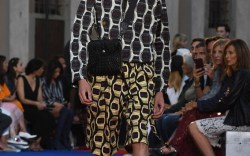 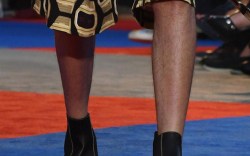 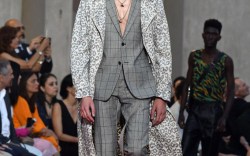 From Nike collaborations to sports-inspired styles (namely soccer and tennis), here are the seven must-see spring ’19 sneakers to come out of the Florentine trade show Pitti Uomo.

The British designer collaborated with Nike on five Flyknit sneakers done in a multicolor collage that riffed on workwear safety harnesses. The sports giant also created full outfits using similar knit technology, which marks the first time Nike has allowed another designer to use its proprietary fabric to construct garments.

Creative director Paul Surridge created a line of handmade soccer balls for Pitti Uomo’s “Fanatic Feelings” exhibition. And at his show, he revealed their soccer-kicking counterpart: sneakers in animal prints and graphic motifs that matched the balls. As for the shoes’ silhouettes, those were inspired by the shape of a cobra head.

MCM recently collaborated with Puma on a sold-out capsule collection of sneakers and tracksuits, but that was just a taste of what’s to come. The German label debuted its first ready-to-wear and accessories collection, entitled “Luft” (German for “air”). Its utilitarian air-inspired vibes far exceeded expectations — as did the skydiver who parachuted onto the runway. Sneakers and runner sandals came in blinding neon shades, with breathable, waterproof integrated socks and chunky molded soles.

The latest heritage label to get the revival treatment is Italian sportswear brand Sergio Tacchini. Founded in the ’60s by the eponymous tennis player, the label peaked in the ’80s. Daniel Hettmann and Angelo van Mol of Band of Outsiders collaborated with the brand on sleek monochrome sneakers in a palette of chalky pastels and canary yellow.

The yellow matched the color of the school bus that dropped models off at the show venue at Pitti Uomo. Inspiration, Hettmann revealed, was school trips to Italy, which translated into sculpture motifs and Roman column prints on the clothing. “We remembered Tacchini from our childhoods,” he said. “We were looking for an Italian heritage shoe brand, and it was the first one we thought of.”

Designer Shinpei Yamagishi of Bed J.W. Ford has collaborated with Adidas Originals on Kamanda sneakers inspired by the ’80s English soccer movement known as “terrace culture,” which features a crochet tongue and chunky sole that recycle bicycle tires. Unfortunately, the spring ’19 style won’t go into production, but it does offer a preview of the two brands’ official collaboration for fall ’19.

While others succumbed to soccer fever, Z Zegna looked to the game of tennis for spring. The brand recently announced pro tennis player Alexander Zverev as its first official face, so it makes sense that the brand turned its Pitti Uomo stand into a mini tennis court as the perfect way to showcase its new Caulera sneaker. It’s named after the Oasi Zegna tennis court built in 1956 by brand founder Ermenegildo Zegna. While the sneaker’s elevated sole may not be built to endure an actual match, it wins points for its retro-chic aesthetic.

They say great minds think alike: Bally was also feeling tennis for spring ’19 with the rerelease of Bally Champion, a style worn by Swiss tennis stars Marc Rosset and Jakob Hlasek during their reign on the circuit. The new archive replica, Kuba, is available in the original colorway, which was endorsed by Hlasek during the ATP World Tour in 1991 (its name, “Kuba,” pays homage to his nickname).

Click through for a closer look at the top spring ’19 sneakers from Pitti Uomo.

Pitch Perfect: How Soccer Became the Last Word in Fashion