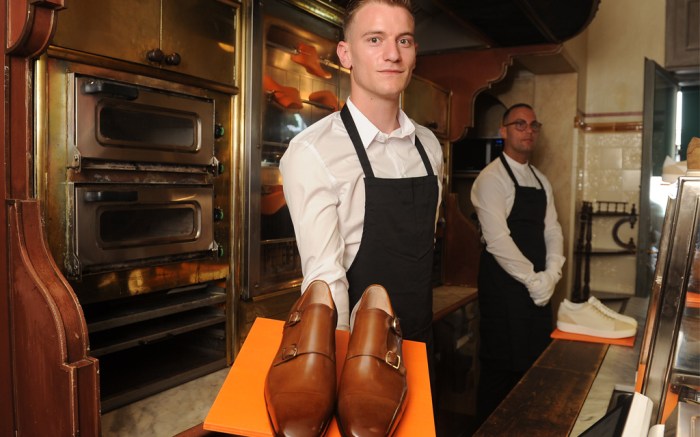 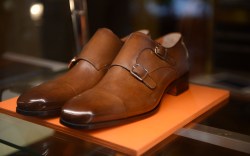 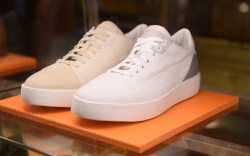 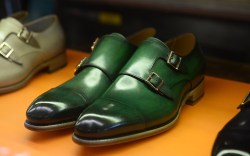 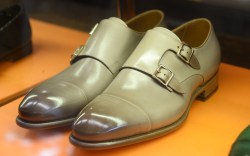 Santoni showed its Milan Fashion Week Men’s spring ’19 collection in a café on Sunday. There was gelato and karaoke outside in the garden while shoes were displayed indoors behind a glass counter usually reserved for Italian pastries.

And just like traditional Sicilian cannoli, the label showed its softer side — both in constructions and color palette. The watchword was “lightness,” said CEO Giuseppe Santoni. “We used a lot of woven leather and natural colors with suedes and nubucks in colonial shades.”

Highlights were summer dress shoes with braided trims and suede double-buckle styles that were so flexible, not only did they have collapsible heels, you could actually fold them up and pop them in your pocket.

The brand has also set its sights on U.S. expansion and from June 1 has partnered with American sales agent Peter Marcus Group. It will now be directly and vertically involved in distribution and opposed to merely providing product.

“2018 and 2019 will be focused on the United States,” Santoni told FN. “We plan to reposition the brand and increase distribution in luxury doors in all the strategic cities.” U.S. sales stand at only 10 percent he said, adding that for a brand like Santoni, “the United States should total 15 to 20 percent of our turnover. We should be there in two or three years.”

It will also upgrade and consolidate the product mix to bring this into line with Santoni’s international image. “Our numbers now in the U.S. are more focused on entry-level prices, $500 to $600 dollars, but we would like to have more at the $900 or $1,000 mark, as that is the real Santoni product,” he said. They will also expand the ladies’ collection, which is still in its infancy.

There are three U.S. stores, one in New York and two in Miami, but while the company is looking at locations on the West Coast — Las Vegas, San Francisco and eventually L.A. — for now, distribution takes priority over retail.

Unusually for an Italian brand, when Santoni launched in 1975, it did 100 percent of its business in the U.S., but the oil crisis of 1990 created a change in strategy. “The dollar dropped to 1,000 lire, so the market became very difficult, as all the shoes from Italy were suddenly very expensive,” said Santoni. It was this crisis; however, that proved the catalyst for global expansion into Europe and Asia.

He said it’s time to take control and get back in the game.