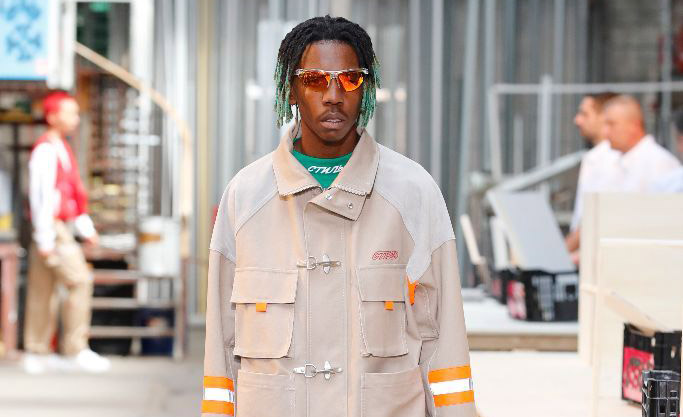 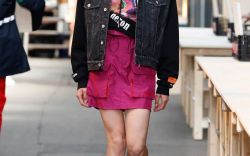 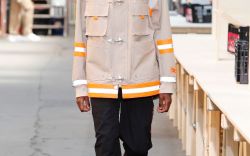 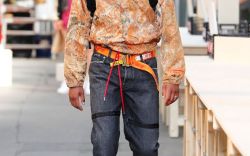 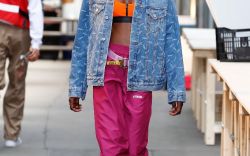 There is a massive buzz surrounding streetwear designer Heron Preston. Case in point, Virgil Abloh headed straight over to his presentation today in the Marais, the moment he had taken his own finale bow at Louis Vuitton during the Paris Fashion Week Men’s presentations.

As did Bella Hadid. And for good reason. Preston’s look No. 12 involved a pair of sheer printed cycling shorts that might have been made for her.

Each of Preston’s 20 styles came teamed with a pair of Nike Air Force 1 sneakers that Preston had customized with the corresponding number on each of the soles. But if you were looking for a Nike collaboration you were looking in the wrong place. Sure, Nike lent the sneakers, but the official collab was the new Nike Vision performance eyewear model. Frames came with four pairs of lenses — interchangeable according to different light conditions.

“I didn’t want to do sneakers as my first collaboration with Nike as that’s what everyone does,” Preston told FN. “The world thinks that Nike is just a sneaker company but to me they’re an innovation company, so I wanted to celebrate that innovation.”

The designer, who is known for his utility-centric pieces, drew on his own greatest hits, self referencing past iterations of his signature fanny pack, which he evolved into pockets on utility vests and backpacks.

Workwear and industrial design, key motifs in his oeuvre, were also reflected in the staging — which saw the podium being built over the course of the presentation. This took inspiration, he said, from a famous painting by Mexican artist Diego Riviera, of an assembly line of workers making a Ford engine in Detroit. “I decided to make a live re-enactment of that painting here in Paris,” he said. “Not making an engine this time, but platforms for the models to stand on.”

It made for one hell of a ride.