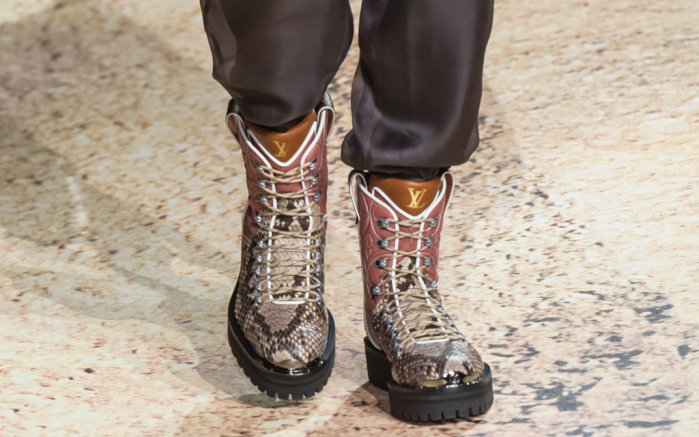 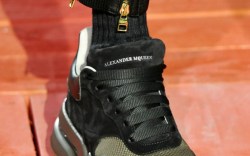 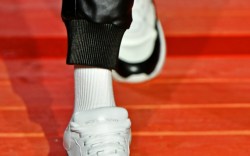 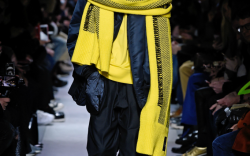 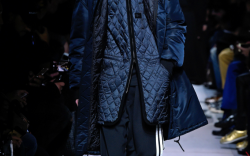 Footwear designers at Paris Men’s Fashion Week pulled out all the stops for fall ’18.

In one of the first shows last Wednesday, Virgil Abloh dubbed his Off-White collection “Business Casual.” These two words basically summed up the week’s footwear theme.

For his own part, he debuted the next installment of his Nike “The Ten” collaboration: Air Jordan 1s in all-white — their logo laces emblazoned with the word “shoelaces.” He tagged the soles with the word “Paris” as a tribute to the City of Light.

Winter whites also made a statement at Valentino and at Alexander McQueen. At Balmain, Olivier Rousteing debuted sneakers for fall, augmenting his army’s repertoire with a more casual vibe. The high-tops were teamed with shiny pants that were tucked in and came cinched at the ankle with Velcro fastenings.

Christian Louboutin got in on the action via a collaboration with Icosae. The luxury French streetwear label showcased two white Louboutin styles: a low-top and a high-top with red detailing on the heels and side panels — the same hue as Louboutin’s famous red undersoles.

Dior Homme’s Kris van Assche teamed roomy suits with baseball boots, and brogues came with a tattoo motif that was laser-printed onto the leather. For his Louis Vuitton swansong, Kim Jones offered up fantastic hybrid hiker boots — their embroidered uppers mixed with luxurious python skin glazed in a futuristic titanium.

With all things ’90s taking center stage, it was only a matter of time before Swear London had its turn in the spotlight. At Vetements, Demna Gvasalia stepped up to the mark with a supersized collaboration emblazoned with the Vetements logo and finished with reflective accents.

Finally at Y-3, four new Adidas/Yohji Yamamoto styles debuted. They were done in monochrome in Adidas’ proprietary Carbon 4D fabrication. However, it was the Gen-Z yellow versions that drew the most attention. They matched the yellow beanie hats that served as invitations to the show.

For more of the best shoes from Paris Men’s Fashion Week, check out the gallery.