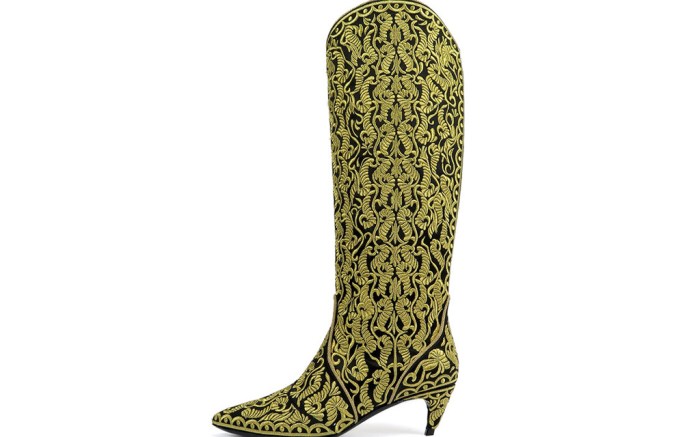 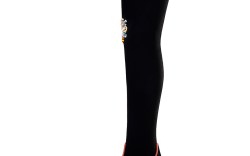 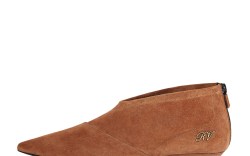 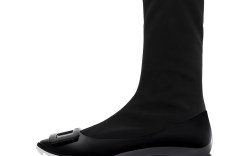 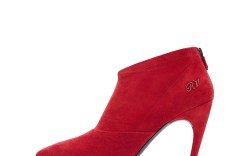 “It’s very emotional, but there’s always a beginning and an end,” said Roger Vivier’s departing artistic director, Bruno Frisoni. He spoke to FN today in Paris during the presentation of his swan song collection. “Fashion is all about changes,” he continued, “but this is a very strong moment for the brand; we’ve achieved so much and have created so many new classics. It has a long life ahead.”

A showstopping exit calls for a showstopper of a shoe, and Frisoni stepped up to the mark: This babouche boot by Roger Vivier is your ultimate exit shoe. “It was inspired by a slipper I bought this summer in Morocco,” said Frisoni, who has a pied-à-terre in the African country. “It was supposed to have belonged to an 18th-century princess,” he said, laughing. “I loved the embroidery, so I translated the pattern into a boot. If you are looking for one extraordinary piece, then this is it.”

The collection took style icon Diana Vreeland as its muse, and an eclectic lineup featured themes from ’60s mod to Arabic souk. “It’s about mixing everything just as she would do in a fashion shoot,” said Frisoni.

Boots, whether ankle, knee or thigh-high, came in myriad iterations, from opulent velvet with dramatic Byzantine-style embroidery to animal prints done in pony skin. “It’s called Wild Kiss,” said Frisoni. “The leopard pattern is made of kisses.” Elsewhere, a black satin ankle boot came frosted with a harness of crystalline brooches sure to make you stand out after dark. The Choc heel was a leitmotif throughout.

Of his decision to leave, “there comes a point when you feel too comfortable and you look for new challenges,” Frisoni said. So what’s next? “If I can find a great partner to help me, I would love to relaunch my brand,” he revealed (he put his eponymous label on hold while working at Vivier). “Though if it comes back, it has to come back in the right way.”